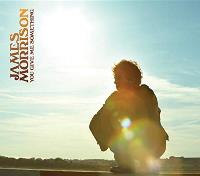 James Morrison is a guitarist and singer/songwriter who is very often mistaken for James Blunt because of their likeness, but he learned guitar to strengthen his voice, “All the really good guitar players – Jimi Hendrix, Jimmy Page, or even Bert Jansch or John Martin – I love all those people,” he once said, “but I didn’t start out thinking that I would be a guitar player. In the beginning, I played the guitar so I could sing. I mainly concentrated on my voice.”

He was born James Catchpole in Rugby, Warwickshire in 1984 and, as a baby, a severe bout of whooping cough actually killed him, because he had to be resuscitated four times but thankfully he made a full recovery and has said that he puts his distinctive voice down to that terrible time. As a teenager, he began busking around Truro and Newquay where he’d moved to as a teenager.

He learned guitar, but now prefers the acoustic, he explained, “I love the electric guitar, but I never felt like I could get good enough on it to really sort of ‘own’ it in a sense. If you plug an electric in, you’d better be able to f***ing rip it up, you know what I mean? I could never do that confidently. I mean, I can sit in my room and rip out a lead and really enjoy it, but on stage is a different thing.”

His first hit, in 2006, was You Give Me Something, which he explained to a contestant on New Zealand Idol when he appeared on the show, “It was intended as a harsh love song,” and seemingly about an uneven relationship where one person loves the other much more than the other way round. “I basically got the initial idea together on my own while working with someone else,” James explained to the Songwriting Team. “I remember I had the C to the descending A minor, to the G, the F and back to the G. That was what I had, which is the progression in the verse, with a few subtle changes. I was saying something like, ‘Will you stay with me in the morning, will you hold me in the morning’ to make it more harsh like you’ve got to work to get the love. I think that was the key that kind of turned the song around, really, the reluctance in giving away nice comments in the song. I like the idea of trying to write a mean love song – as mean as you can be without making the other person go, ‘What’s the point?’ It’s kind of like backhanded compliments really. It was those three chords in the intro that really cemented it. I had the verse and then we worked on the chorus together (with producer and co-writer Eg White) and I imagined the chorus melody to be like brass. Once I got the chorus, I remember thinking ‘I don’t want brass in my songs because it’s too like Frank Sinatra’. I was that naive with music. It was only after a few months of listening to the song that I thought, ‘Yeah, actually, this is a f***ing good song.”

The song reached number five in the UK, top five in Venezuela, Switzerland, The Netherlands, Austria, Belgium and Australia, but in New Zealand it went to number one. The parent album, Undiscovered, went to number one in the UK, spent 81 weeks on the chart and eventually sold just over a million copies.

He released a further four albums, Songs For You Truths For Me (2008), The Awakening (2011), Higher Than Here (2015) and his latest, You’re Stronger Than You Know, is still on the album chart. He begins a UK tour in October.

James is always striving to improve, he says, “I feel like I have to prove myself and to keep getting better, I don’t think that’ll ever end. So many things have come together – my family, the music sounding the way I want it to, and having the freedom that I’ve always wanted. The stars have aligned and this new album has given me a new lease of life.”