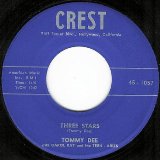 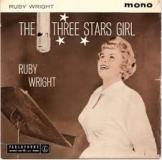 Thousands, if not millions, of songs have been recorded as a tribute, but none probably more than to either Elvis Presley or Buddy Holly, Richie Valens and the Big Bopper who all died in the tragic plane crash of 1959. Among the artists who have paid tribute, via song, for the latter three are; Ray Campi – The Man I Met, Loretta Thompson – Buddy, Big Bopper and Ritchie, Mike Berry – A Tribute to Buddy Holly, Don McLean – American Pie and, this week’s subject, Three Stars by both Tommy Dee and Ruby Wright.

Death discs in the early sixties were frowned upon, especially by the BBC who decided to limit airplay of songs like Tell Laura I Love Her, Teen Angel, Three Steps to Heaven, Ebony Eyes, Leader of the Pack, Endless Sleep and Terry to name but a few. Another track that nobody played, apart from Kenny Everett, was I Want My Baby Back by Jimmy Cross, which was just downright distasteful and was voted number one of Kenny’s album The World’s Worst Record Show. Check it out if you’re brave enough.

On January 23rd 1959, Buddy, Ritchie and the Bopper began a Winter Dance Party tour which began in Milwaukee, Wisconsin and consisted of venues that were spread far and wide. They travelled by tour bus which was so poor that it had no heating and kept breaking down and the terrible winter weather only made matters worse. Even Carl Bunch, Holly’s drummer, was taken to hospital with frostbite. On 2nd February they were scheduled to play in Clear Lake, Iowa and then the next night in Moorhead, Minnesota which was nearly 400 miles away. So Holly chartered a private four-seat plane from Dwyer Flying Service to take him, Waylon Jennings and Tommy Allsup (who were all on the same tour) to their next destination with the idea of leaving after the show and arriving early the next morning to get themselves freshened up and ready for the next night. Tommy offered up his seat to Valens who initially said no, but then they tossed a coin and Valens won so he got the seat. Because The Big Bopper (born J.P. Richardson) was a very large man, Jennings offered his seat to the Bopper as he was suffering from flu.

The pilot, Roger Peterson, was not fully certified to fly a plane by instrument only, which means that if weather conditions don’t allow clear vision, they have to rely on the plane’s own navigational instruments and that requires a separate qualification. Despite this, he took off and just before 1am, on the morning of 3rd February 1959 the plane crashed into a cornfield just outside Mason City, Iowa with all four killed instantly. The pilot was trapped in the wreckage whilst the three singers were all thrown to the ground. That tragedy became known as ‘The day the music died’.

Three Stars was written and first recorded by an American DJ called Thomas Donaldson who went under the professional name Tommy Dee. He was working at KFXM in San Bernardino and was on air on the day of the disaster and began writing the song the same day. Tommy explained to the writer Albert Leichter, “I was on the air, when it happened, the bells went crazy on the tele­type, ‘what’s this!’ I started reading it. I wrote the song, right on the spot: poured my heart out. ‘No, it can’t be true. My friend, next door, had a little Webco (tape recorder). I just put it down as I wrote it, just a strum of the guitar. He told me I should make a record on it. I told him all I meant for it to be was a tribute to play on my show.” He had no intention of recording it himself. Once he’d written the words he took it to Sylvester Cross, the owner of Crest records, Dee recalled, “Cross said, ‘do you mind if Eddie Cochran records this song?’ I said, ‘No.’ Within minutes Eddie and his manager Jerry Capehart were present, they listened to it. Eddie, in tears, said, ‘Let’s cut it right now.'” Cochran spent several hours in the studio, but as Dee put it, “It just didn’t come off.” It was quite likely that he was still in an emotional state from hearing the news. His version remained in the archive and was eventually issued in America on the 1971 album Legendary Masters.

Tommy and Carol, along with her group, the Teen-Aires, only got to practice the song once time before recording. “There was no time to put together a flipside an old demo by Kay and the group was put into service,” Tommy said. “I took an acetate back to the radio station and gave it to the all-night man, ‘here’s my new record,’ I told him, ‘give it a play, if you get a chance.’ I didn’t have a radio in my car, I had a ’47 Mercury; the radio was out. I couldn’t even listen to it.”

In the UK it was covered by Ruby Wright. As noted by my friend and colleague Stuart Colman in the sleeve notes of the Fantastic Voyage CD collection we put together, “It can’t be easy when you happen to share your professional name with another recording artist. That’s exactly what happened to Ruby Wright. The dichotomy wasn’t helped by the fact that both Rubies pursued country music and sang in trios during their teens. Whilst the younger Ruby was the daughter of Kitty Wells and Johnnie Wright, the elder Miss Wright secured her reputation by singing with Barney Rapp and His New Englanders. Ruby liked the gig so much, she married Barney the bandleader. Taking the solo route, she signed to King Records and wound up scoring in the UK with her version of the Jim Reeves hit Bimbo in 1954.”

In 1957 she recorded a festive song called Let’s Light the Christmas Tree once again which sold a reported 250,000 copies and reached number 41 in America but failed to light the touch paper in the UK. In April 1959 she provided backing vocals for Kathy Linden’s original of Goodbye Jimmy Goodbye which became the final UK hit for Ruby Murray. Then came Ms Wright’s second and final hit when her cover of Three Stars reached number 19 enhanced by a narration provided by the Cincinnati deejay Dick Pike.

Tommy Dee never considered himself a singer but he did make the occasional appearance on Dick Clark’s American Band­stand and also toured with Cochran and Conway Twitty and often backed by Gene Vincent’s Blue Caps. Dee concluded, “My record was in the true sense of the word, a novelty record. I was in the right place at the right time. Everything fell in place.”