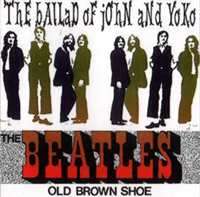 In music the word ballad generally has a definition meaning a slow sentimental or romantic song, but this week’s suggestion is most definitely not that. It only had half the group on the song and getting banned on numerous radio stations probably ensured its place at the top of the chart.

John Lennon liked instant song writing – writing a song one day, recording it the next and releasing it as soon as possible. By 1969, he and Yoko were self-absorbed and he wrote about their life in The Ballad of John and Yoko, wittily calling themselves ”two gurus in drag’ and once again leaning heavily on Chuck Berry’s style.

The song was released in June 1969 just three months after John and Yoko had married – and on the quick. Paul had married Linda on March and on the back of that John decided he wanted to marry Yoko. They had some plans but they didn’t work. The first was to get married at sea, so on a journey to Dorset, Lennon instructed his driver to divert to Southampton to find out what was involved only to be told it was not allowed. Then he had the idea of getting hitched in Paris and asked his management team to arrange it. Peter Brown found out that getting wed in Paris at short notice, especially if you are not French, couldn’t happen either, but did advise Lennon that Gibraltar was a possibility as it was controlled by Britain and John was British. So that’s where they married and then honeymooned in Amsterdam.

The Ballad of john & Yoko is really written about all John’s run-ins with various authorities, the opening line, ‘Standing in the dock at Southampton trying to get to Holland or France’ sums up the plans he had and Brown’s call in summed up in the third verse, ‘Peter Brown called to say you can make it okay, you can get married in Gibraltar near Spain.’

The honeymoon was a little unusual as John had invited various members of the press to their hotel. No doubt some of them believing that it was to witness a special moment between the couple and have an exclusive scoop only to find out that it was a rant and a protest about the war which they did from their bed.

This was the last Beatles number one, and the only one to feature just two members. As George Harrison was on holiday and Ringo Starr was filming The Magic Christian, John asked Paul McCartney to record it with him. Although Paul had his differences with John, he was a working musician and readily agreed. They enjoyed recording the song with John urging the drumming Paul to “Go a bit faster, Ringo” and Paul responding to John playing lead guitar, “OK, George.” Paul also plays bass, piano and maracas on the track.

Some UK radio stations and most in America refused to play the track because of the line, ‘Christ, you know it ain’t easy’ which shows John frustration. The word was deemed invective and almost certainly, the record would have been banned more if he had come from a lesser act than The Beatles. Instead, the Top of The Pops film, which used news footage of John and Yoko, made great play of the word ‘Christ!’ by flashing it on the screen each time that Lennon sang it.

At the song’s conclusion there is an inspired Spanish guitar piece which was ‘borrowed’ from Johnny Burnette and his Rock N’ Roll Trio’s 1956 song Lonesome Tears in My Eyes.

A few weeks after the song dropped from number one, John had the idea for the song Give Peace A Chance, but this time he used the pseudonym, The Plastic Ono Band. He had something of a Messianic complex because only a few weeks after making this single, he called his associates into the board room at Apple and told them that he was Christ reincarnated and was going to announce it on the evening news. They agreed to have a drink first and by night-time, John’s claim had been forgotten. Pity really – it would have made great TV, followed, one would think, by John’s arrest for taking mind-bending drugs.