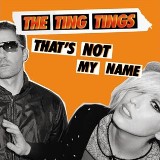 For the very determined, if someone says you can’t do something or something will never happen, they will go out of their way to make every effort to make sure it does. That applies very much to this week’s song. That’s Not My Name by the Ting Ting’s is a terrific catchy pop song, but as Katie White, the group’s singer and guitarist said, “Everybody told us That’s Not My Name would not get played on the radio because it wasn’t pop enough or indie enough, but sometimes it takes touring our butts off to get the songs heard.” It worked.

The Tings Tings are a duo from Salford, Greater Manchester with the other member being drummer Jules De Martino. De Martino was born in 1969 and White was born in 1983. The former was originally from London and formed his first band, Mojo Pin in the early nineties. Katie was born in Lowton in Cheshire and made her debut as a member of an all-girl punk called Technical Knock Out often shortened to TKO. The pair met in Manchester and discovered they both had a mutual respect for the Bristol band Portishead and so the two of them, along with De Martino’s friend Simon Templeman formed a band called Dear Eskimo. They signed a deal with Mercury records, but changes within the label curtailed the band’s activity and they disbanded. They were not happy as Katie recalled in an interview with Q magazine, “You feel like your career is over at 22 and you haven’t even got a record out. It was like, you really are that forgettable unless you put your stamp on something.” The pair briefly took other jobs, but decided to try again and reform, this time as a duo and called themselves the Ting Tings which was the name of a colleague of White’s when she worked in a shop.

They signed to a small indie label Switchflicker and played a number of gigs which, thanks to social media, brought them to the attention of various bloggers which, in-turn, reached people in the music industry and so they eventually signed with Columbia. Both members wrote That’s Not My Name and White, in an interview with The Guardian, explained the way the music industry treated her, “The first marketing meeting we had with our last label, I’d gone to all the effort of making a look book of all my favourite art and photographs, just to show them what I’m about. And I took it in and they said, ‘Oh, yeah, great…’ They didn’t even look at it, just pushed it to one side and asked if I was prepared to take my kit off for men’s magazines. And I was like, Aaargh! There’s plenty of girls who can do that, and they’ve got bigger boobs and better faces, and I’ve got no idea why they thought I might do that. I would feel terrible doing that – I could never do it in a million years.”

De Martino explained the sentiment behind the song, “We were really frustrated because we had been in a band before and been dumped by our label. Back at the time, we weren’t specifically trying to write the song about anything. We were just trying to have fun with it. But when we look back at the lyrics we realise they’re all about frustration. In a way, she’s saying she wants to be heard. She wants people to know her name.” In an interview with Pop Justice, White explained what she thought of the song once it was recorded, “I loved it straight away but I felt like my judgment had been screwed because we went through our old band and it all went wrong, so I thought ‘what the hell do I know – I obviously don’t have good ears’. But when we started playing it live it became quite electric and the hairs on my arms were standing up, and it felt like it had a lot of power behind it.”

That’s Not My Name entered the chart at number one on week ending 24th May 2008, White recalled the moment she found out in an interview with The Guardian, “We were sorting our laundry when we first heard the news, we were playing Manchester that night, but we had to do a load of washing first, and the Radio 1 chart show were ringing us – you have to do this fake thing where they ring you during the day and you have to pretend it’s the evening, and I’m a really bad actress. I was like, ‘Yeah, it’s good!’ We played the Academy that night and the whole audience was really hyped up. I didn’t want to mention being number one till we got to play That’s Not My Name, so I could thank them, but the audience kept shouting, ‘You’ve knocked Madonna off number one!'”

The vibe was so strong that the following week, two more tracks, Great DJ and Shut Up and Let Me Go both entered the chart, the latter reaching number 13. In the digital era, anyone can download a handful of album tracks and they all go in the singles chart. They were downloading in their droves because the same week, the parent album, We Started Nothing, went to number one. In an interview with Seventeen magazine, White said, “It’s my favourite track off the album. It was the second song we wrote and the first time I felt like I had something to say. I felt like I was really empowering myself, which is a good feeling. Writing was so easy on this album. I think it’s because we didn’t care what people thought. We weren’t writing a song thinking ‘Oh it’ll get played on pop radio,’ we just kept doing what we were doing.”