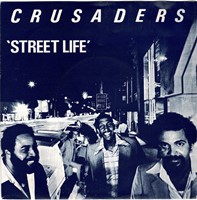 Many songs have uncredited vocalists and, in-turn, many of them fade into obscurity, one good example is Dean Friedman’s 1978 hit Lucky Stars; the song was only credited to Dean but is clearly a 50/50 duet with a lady called Denise Marsa, but after that hit she wasn’t heard again although Dean did once tell me he remains in touch with her on an occasional basis. In this week’s case, the uncredited went on to have a prolific career. The song in question is by the jazz band The Crusaders and their debut UK hit was Street Life in 1979 with a vocal provided by Randy Crawford.

The Crusaders’ UK chart career began in 1979, but their roots go back as far as 1952 when a few guys got together to play some jazz music and called themselves the Swingsters. The original members were Wilton Felder on bass and saxophone, Wayne Henderson on trombone, flautist Hubert Laws, keyboard player Joe Sample and drummer Stix Hooper whose real name is Nesbert Hooper. As teenagers they travelled the Gulf Coast playing various strip joints and small clubs before changing their name to the Jazz Crusaders.

During the 1960s, they released 16 albums and two more in 1970 before shortening their name to the Crusaders. At the height of the career they opened for the Rolling Stones but their music was often commercial playing renditions in well-known songs in a jazz-funky style. “We are the fathers of jazz-funk-fusion, and I am a funkster at heart,” Wayne Henderson explained in a 1995 interview with The Los Angeles Times. “We took pop tunes like Eleanor Rigby and So Far Away and did them melodically with a groove, so people could dance if they wanted.” Joe Sample said in 2003, “There’s nothing city-slick about what we do, it’s a combination of southeast Texas and Louisiana roots.”

They released a further 11 albums in the 1970s, but in 1979, their 12th album, Street Life, and its title track changed everything and they suddenly hit the big time. The track was written by Joe Sample and Will Jennings. Joe had first heard Randy Crawford sing in 1976 when she was recording her debut album Everything Must Change which he played on and arranged as well. That album contained Randy’s original version of I’ve Never Been to Me which was a 1982 UK number one hit for Charlene. Joe recalled, “After I did two recordings of Randy’s in 1976 and around that same time I met the lyricist Will Jennings and it looked to me right and I thought, ‘wow’, everything is just right because I could do something I had always wanted to do and that was to introduce vocals to the Crusaders. The reason being, I had always loved the voice and the trumpet of Louis Armstrong, I love the songs Duke Ellington had written and I loved the collaborations with Count Basie, Frank Sinatra and Sarah Vaughan and I always thoguht the combination of the instrumentals with a unique voice was wonderful. When I heard Randy’s voice, I thought to myself, ‘I think the time has come, I finally heard the voice – the ‘Crusader’ Voice.”

Randy recalled her story, “In 1976 Joe, who had played on my debut album, felt that my voice was distinctive and struck a good nerve and when he and the Crusaders decided they wanted a voice for Street Life I was the person he wanted. I was the first female ever to sing with the Crusaders of which was very flattered and very proud.”

Will Jennings, in an interview with Song Facts recalled, “The lyric, all that came right off of Hollywood Boulevard. It’s also been used in a lot of rap songs, some samples, they always do the chorus.” As for Sample, “It was the beginner’s ski slope at Mammoth Mountain in California,” he explained in a Reuters interview, “I saw people falling, running into each other, it was absolute chaos. It looked like a boulevard of madness. And I said, ‘That’s what street life is.'”

Randy’s career took off after that hit. Sample and Jennings both wrote her first two hits, Last Night at Danceland and the number two hit One Day I’ll Fly Away. Other hits of hers included a cover of Turley Richards’ You Might Need Somebody, Tony Joe White’s Rainy Night in Georgia and John Lennon’s Imagine which was a live recording that I was present at. Her only other top 10 hit was Almaz which reached number four in 1986. Randy is still recording but turned more to jazz and recorded and album with Quincy Jones and George Benson.

The Crusaders continued recorded and in the mid-90s reverted to the Jazz Crusaders. In 2010, they called it a day. Wayne Henderson and Joe Sample both died in 2014 – five months apart and Wilton Felder died the following year.

Jennings continues to write prolific songs including While You See A Chance, Valerie and Back in The High Life Again with Steve Winwood, Up Where We Belong for Joe Cocker and Jennifer Warnes, I’ll Never Love This Way Again for Dionne Warwick, Didn’t We Almost Have It All for Whitney Houston, Tears in Heaven for Eric Clapton and the 1998 number one hit My Heart Will Go On for Celine Dion. His income continues in the 2010s by way of cover versions of Higher Love by Tyler James (2012), One Day I’ll Fly Away by The Vaults (2016) and the 2019 number two cover of Higher Love by Kygo & Whitney Houston. He was inducted into the Songwriter’s Hall of Fame in 2006.