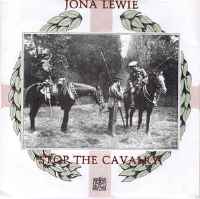 This suggestion came in about two months ago, but I thought I’d leave it until nearer Christmas because, although nothing at all to do with the festive period, it’s forever been associated with it. The man who recorded it once said, “I never intended for this to become a Christmas single. It started life as an anti-war song.” It’s probably all because of one line in the song. Let’s find out.

Jona Lewie, who was born John Lewis in Southampton on 14 March 1947, first charted as a soloist in 1980 although he was no stranger to the chart.  His career began proper in 1969 when he joined Brett Marvin and the Thunderbolts as lead singer and in 1971 had a slot supporting Derek & the Dominoes. Although he remained with them until 1973, it was in 1971 that he recorded one of his own compositions called Seaside Shuffle which was released later that year with another group he fronted called Terry Dactyl and the Dinosaurs. It failed to take off, but thankfully after being spotted by Jonathan King and being signed to his UK record label, Seaside Shuffle was re-released and went to number two on the UK chart. The follow-up, On A Saturday Night stalled at number 45. He left the band and continued as a solo artist.

In 1977, he was signed to Stiff records where he toured for a couple of years as part of the Stiff package with various other acts on that label including Kirsty MacColl whom he often sang with. In 1980, he charted with You’ll Always Find Me in the Kitchen at Parties which went to number 16. It featured Kirsty doing backing vocals on Top of the Pops, but not on the single. Then came Stop the Cavalry. Lewie remembered, “I signed to Stiff Records with 50 demos to my name. When I played Stop the Cavalry to Dave Robinson, who founded Stiff, he said it was ‘just another anti-war song’. I’d just bought an electronic keyboard – the Poly Moog, as used by Gary Numan so I went back and beefed up the arrangement, playing the melody on a kazoo. Dave loved it.”

In an interview with M-Magazine, he revealed that it was while he was playing about with his grandmother’s piano that he stumbled across a melody that he liked and that would inspire the song. “I had this line in my head, ‘Can you stop the gallantry?’ and found a melody for it. Then I changed gallantry to cavalry and everything just fell into place,” he told The Guardian. “I started thinking about the Crimean war and the Light Brigade, about how officers would yell ‘Charge!’ and few of the men who did so would come back. Then I started thinking about other scenarios, like the trenches in both World Wars. Back then, in the late 1970s and early 80s, the possibility of nuclear war felt very real, so I also penned the line: ‘Mary Bradley waits at home, in the nuclear fallout zone.’ The opening line – ‘Hey, Mr Churchill comes over here to say we’re doing splendidly’ – wasn’t a dig at Churchill, who was a great leader during the war. I just imagined a tired private who was fed up with Churchill forever trying to gee up the troops, who would be shot if they deserted. I imagined my soldier standing for prime minister and saying: ‘If I get elected, I will stop the cavalry.'”

So how come it’s associated with Christmas? Lewie explained, “The soldier in the song is a bit like the eternal soldier at the Arc de Triomphe, but the song actually had nothing to do with Christmas when I wrote it. There is one line about him being on the front and missing his girlfriend: ‘I wish I was at home for Christmas’ and the record company picked up on that from a marketing perspective, and added a tubular bell.” Additionally, a Salvation Army brass band was recruited to play the main melody just like you’d get in the streets in busy cities at Christmas. The label’s owner, Dave Robinson, said, “I’ve always loved a Christmas single. I think it was me who suggested the brass band, actually, to make it more Christmassy.”

A few years ago, Dave Robinson reflected on Jona saying, “He’s a passionate, lovely, talented geezer. He has tapes full of ideas, and never gives up on any of them. He recently played me some ideas for a new album. I said: ‘Jona, these are the same songs I rejected 35 years ago.'”

← You Needed Me (Anne Murray)
Hanging on the Telephone (Blondie) →