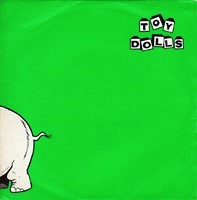 Well, if I didn’t believe in fate before, I certainly do now. I cannot believe that it was whilst researching some archive material for this week’s Single of the Week – which is Nellie the Elephant, at 16:38 hours on Saturday 7th November 2020 that my phone started going mad with messages that Joe Biden had become the 46th President of The U.S.A. and Trump was history. So, in the words of this great song, ‘Off (s)he went with a trumpety trump, trump trump trump’ Hopefully not to Bombay (or Mumbai as it is now) because I wouldn’t want that inflicted on the poor Indian people.

The song goes back to 1956 when it was written by the British songwriters Ralph Butler and Peter Hart. Butler was born in 1886 and during the 1920s – 1950s wrote, or co-wrote mostly novelty songs. His repertoire included The Sun Has Got His Hat in 1932 and the Flanagan and Allen World War classic Run Rabbit Run in 1939 which were both penned with Reginald Armitage under the pseudonym Noel Gay. Gay is also best remembered for writing The Lambeth Walk and George Formby’s Leaning on a Lamp Post.

Nellie was first recorded in 1956 by a 12-year-old actress called Mandy Miller. She was born Carman Isabella Miller in Weston-Super-Mare in July 1944 and it was her family who began calling her Mandy. Her father was a BBC Radio producer and in 1950 took Mandy and her older sister Jan to watch a film being made at Ealing Studios. Mandy’s looks and enthusiasm impressed the people in charge that they offered her a small role in the film The Man in the White Suit which starred Alec Guinness. Her most impressive role came in 1952 in the film Mandy in which she played the part of a deaf girl called Mandy. In 1960, she attended the Royal Shakespeare Theatre and later made a couple of guest appearances in the TV shows The Avengers and The Saint, but soon after she left the movie world. She moved to New York to become an au pair and three years later married an architect called Christopher Davey, had three children and enjoyed a ‘normal’ life. In the 1990s she moved back to Britain where she remains in retirement.

Her recording of Nellie the Elephant was produced by George Martin and received endless plays on Uncle Mac and later Junior Choice, but never made it onto the UK chart, at least not until 1984 when a punk version was recorded by the novelty band The Toy Dolls.

The Toy Dolls were formed in Sunderland in 1979. Their line-up over the years has changed so many times, but at the time of the hit their personnel was singer/guitarist Michael Algar who is known as Olga and the only constant member for 40 years, bass player Flip (b: Philip Dugdale) and Happy Bob (born Robert Kent) who was their fifth drummer. Dave the Nut is their current drummer and their 13th.

Their version of the song was their fifth single to be released. All their previous ones, Tommy Kowey’s Car ‎(1980), Everybody Jitterbug ‎(1982), Cheerio & Toodle’ Pip ‎and Alfie From the Bronx (1983) went nowhere. Even Nellie, which was first recorded and released in 1982 didn’t do anything. They were signed to Volume records an independent label and also a small chain of independent record shops based in Newcastle upon Tyne.

The Toy Dolls followed it up with We’re Mad later the same year followed by James Bond (Lives Down Our Street), She Goes to Finos in 1985 and Geordie’s Gone to Jail in 1986 but nothing else brought them to the chart. Even a fairly indifferent version of Livin’ La Vida Loca in 2000 didn’t excite the CD buyers.

As for cover versions, well, the beloved little pigs, Pinky & Perky did it in 1962, Cannon and Ball in 1982, Sam Brown in 1992, Crazy Frog in 2006 and both The Dickies and the unlikely named Dixie Ticklers in 2008. In 1990, there was a short-lived TV series of the same name which began on ITV and then transferred to Children’s ITV in which Nellie was a pink elephant and voiced by Lulu who also performed the opening theme. It was narrated by Tony Robinson. The most unlikely version was recorded in 1989 by a Dutch novelty band called WC Experience who called it Fritske d’n Olifant.

In 1957, one year after the song was first recorded, Butler won an Ivor Novello award for that Year’s Outstanding Novelty Song, he was 70 years old at the time. Butler died in a London hospital on 8th April 1969 at the age of 82.

The Toy Dolls had a stack of tour dates lined up in 2020 to celebrate their 40th anniversary but due to Covid-19, those dates will be delayed until 2021. In the meantime, Olga has been giving guitar lessons via the Toy Dolls website. He said, “I aimed this course at anyone who has just bought a guitar or who has never played before.” He speaks slowly and goes over and over each section. You can have a look here http://www.thetoydolls.com/ if you fancy it.