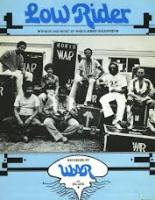 Is there a fine line between funk and rock? This week’s track is a top 20 hit from 1976 which I’ve always classed as a funk track and that snuggles in beautifully between songs like Black Betty, Play That Funky Music and any of James Brown’s repertoire, but not too long ago, Classic Rock Magazine listed it at number 87 in their all-time Top 100 classic rock Songs, that track is Low Rider by War.

The original group started out as The Creators, playing clubs in the Los Angeles area, where they became the first black band booked on the Sunset Strip. After a few months they changed name to Nite Shift – so called because the drummer, Harold Brown, worked at a steel yard at night. Their big break came when record producer Jerry Goldstein conceived the idea of finding a group to back Eric Burdon, following his departure as lead singer with The Animals. In 1969 Jerry attended the Rag Doll in North Hollywood and saw a footballer called Deacon Jones, but what caught his eye was his backing band. He paired them up with Burdon and spent a few months touring around Southern California to discover how they were received before they recorded their debut album Eric Burdon Declares War. After two albums and three American hits including the number three Spill the Wine, Burdon left and the band would continue without him.

The original line up consisted of lead singer Lonnie Jordan, bassist B.B. Dickerson, guitarist Howard E. Scott, Charles Miller on sax and flute, Lee Oskar on harmonica, percussionist Papa Dee Allen and drummer Harold Brown. They were a multi-racial group who developed their own unique sound to incorporate funk, jazz, Latino, rock and soul. “We never thought we’d hit because we were too different,” says Jordan, “people wanted us to be like the Chambers Brothers or Sly and the Family Stone. But we just let it flow and played.” There was an ever changing line up because various members kept getting drafted to the Vietnam War.

The hits came thick and fast in America and they hit the top 10 with The World Is a Ghetto (1972), The Cisco Kid and Gypsy Man (1973) and Why Can’t We Be Lovers in 1975. Their first international hit, Low Rider, reached number seven Stateside and number 12 in the UK.

So what exactly is a low rider? As well as being a customised car it is also a culture. The cars are modified with hydraulic lifts that allow the driver to lower each wheel and make the car bounce. They are often coruscating with ridiculous and lairy paint jobs, they have very small steering wheels and swivel seats. Most of the band grew up in Southern California and were immersed in low rider culture. One member of the band who didn’t get drafted into the Vietnam War was the drummer Harold Brown and that was because he had his own car business and he told Song Facts, “The first time I knew about what we called Low Riders were my cousin Leon and a few more cruising up and down the coast in California. You also had Hot Rodders, which were a different breed racing around town. They were from the other side of the tracks.  Leon left his 1953 yellow Mercury with black prime spots on it, tuck and roll seat covers from Tijuana Mexico, lowered in the front, parked on the side of the house. He eventually lowered it all the way around after returning from the Korean War. My brother KB and I had a 1953 Dodge. We’d chop our springs with torches – this would lower the car a few inches. It made for a hard ride up until homies started putting hydraulics on them. If you were driving a truck with lift gates on the rear, you’d better check to see if someone has stolen your hydraulics – it happened to me. We would drive from Pomona California to South Los Angeles taking side streets and main drags through El Monte, Whittier, Watts, and Compton, then eventually into Long Beach/San Pedro, California. When they finally built freeways in Southern California we would cruise in the slow lane just in case we had to pull over and do some repairs. There wasn’t any AAA for us folks. Back in 1965-66, The Sheriffs would stop us for our car being too low. At first they would have a long rod with a clamp on it. Then they would take a pack of Camel cigarettes and clamp it on to the rod sliding it under the chassis of your hooptie. If it didn’t go from one side to the other they would give you a ticket or impound your ride. You have to call your daddy or momma to come give you a ride. After a couple of years they became more sophisticated by having a stick with a caliper (sic) on the end made as a ruler. The Sheriffs would measure from the ground up to your rims, then slide the calipers (sic) from one side to the other to make sure you had proper clearance. Could you imagine having a blow out? You would be dragging along the cement. Thank God for lifts.”

So how did the song come about? Brown continued, “It was the group’s sax player, Charles Miller, who came up with the idea for the song. What happened on Low Rider was in the studio, we were jamming, and I was supposed to have been on the downbeat. But all of the sudden I was on the upbeat. And I said, ‘Oh, boy. I got the beat turned around.’ I didn’t panic. I said, ‘Wait a minute. Stay there. Don’t change it. Stay.’ Because as long as you keep doing it over and over and over, it won’t be a mistake. We were just messing around, you know. Then the next thing I know, Charles started just singing, ‘Low ri-der drives a little slower. The low…’ he was just pumping it. And then the next thing I know Lee’s over there putting that harmonica on, because Lee is a melody man all the time. And then – boom. If you’d hear the original version of it, all with that jam, that would be worth a million right there. When we finished it, all of us looked at it, ‘That’s a hit.’ We didn’t know that it was going to be an icon.”

Like many songs, there can be the odd misinterpreted line and then a radio station will decide to ‘limit’ its play. In America, the lyric ‘Take a little trip’ and ‘Rides a little higher’ led them to think of drugs, but not the case as Brown explained, “We did not want it to sound as if we were referring to drugs. As a rule most Lowriders are not big druggies, because we all had regular jobs as machinists, body and fender and mechanics. We didn’t have any extra money for drugs. We put the money into our cars. Drugs didn’t come into the picture then. We were trying to convey that the low rider gets a little higher by riding in his automobile, being proud of how he takes care of his ride. It’s like riding around in your trophy. We have found that if you are a real low rider with a nice ride and it’s clean you will find that his or her home and work place is neat and in order. We low riders like to make our surroundings better by taking pride in what we are blessed with.”

Like much of James Brown’s material, Low Rider has been sampled on numerous songs usually tucked away on various albums, but most notably on the Offspring’s 2000 top 10 hit Original Prankster. It was also used as the theme to the ABC sitcom The George Lopez Show and as the opening song in the 1978 Cheech & Chong comedy movie Up in Smoke. It also featured in A Midsummer’s Nice Dream – a 2011 episode of the Simpsons and more recently, in 2014, in an American advert for the drug Crestor.

In 2008 there was a sort-of one-night only reunion between Eric Burdon and War – well Lonnie Jordan as no other members were invited to be part of it. In 2014 they were nominees for induction into the Rock and Roll Hall of Fame.