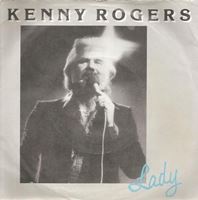 When one superstar asks another superstar to write them a song and the reply is, “I don’t think I have time” you would probably think to yourself, what a jerk! But in this case, it was sort of done in jest but the thought that there might be quite a bit of money in it convinced him and the deal was done. Who and what? Read on.

Kenny Rogers explains the story, “I was in Las Vegas and wanted a new song, so I called the king of the love songs, Lionel Richie and said to him, ‘Lionel, I’d love for you to come over and write a song for me’, and Lionel said, ‘I don’t think I have time’. I said it’s going to part of a Greatest Hits album and I think it will sell a minimum of four or five million copies and Lionel said, ‘Is seven o’clock tomorrow night ok?'”

Kenny continued the story, “So at seven o’clock the following night he turned up and we had this little upright rinky dink piano in the dressing room and just before he starts to play he said, ‘I have to tell you I pitched this song to the Commodores and they turned it down’ which I thought was an interesting approach to selling a song. Anyway, he started playing and singing, ‘Lady’ and then la-la’d the next line and stopped. He only had the one word. I asked him how the Commodores could have turned that one word down. So, we go into the studio six months later, we start recording, I finish the first verse and I’m sitting looking at the lyric sheets and there’s not a second verse. I said to the engineer, ‘Where’s Lionel?’ He replied, ‘He’s in the toilet writing the second verse.’ That song was a turning point in my career and one of the most identifiable songs I ever done.”

In a television interview, Lionel said, “I’m not used to pitching songs, but I had this song called, Baby. I land in Vegas and Kenny began talking to me about recently marrying his fourth wife, Marianne Gordon. He said, ‘Before you do your song, let me tell you, I married a lady, like a real lady.’ He said, ‘A country boy like me from Houston, Texas, what I am doing with a lady? He kept on going, she’s got such taste, such class, such style, and she’s such a lady. Oh, by the way, what’s the name of your song?’ I said, Lady,”, Richie says, laughing. “I’m no fool.”

Kenny, in his autobiography, Luck or Something Like It, says of Lionel, “He writes the most beautiful melodies, and his lyrics are like musical conversations. Not many people can do that. I’ve asked him time and time again for another song, but now that he is so successful, I think he feels that if they are good enough for me, they are good enough for him. Lionel happens to be the most unique songwriter I’ve ever encountered.”

So how come Lionel only had one verse and is that true? Lionel explained, “It is true. I was in the bathroom, on the counter, because I didn’t realise Kenny was going to get it so fast. So, he said, ‘let’s do Lady. Well, I hadn’t finished Lady. I didn’t have the second verse. He started sending toilet paper back and said, ‘Do you have the second verse.’ I said, ‘not, yet just hold on for a minute.’ Kenny Rogers does it to me every time.”

Lionel produced the song and it went to number one on the Billboard Hot 100 Singles chart where it stayed for six weeks. In the UK it reached number 12 spending the same number of weeks on the chart.

Lionel recorded his own version of the song which appeared on his 1998 album Time and in 2012, Richie and Rogers recorded a duet version for former’s album Tuskegee, which took its title from Lionel’s birth town. Lionel did ok out of it, he told Entertainment Weekly, “Lady is my profitable song. I have an estate that Lady bought.”