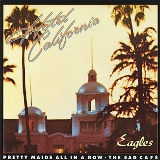 Many songs seem to have no meaning, ie have you ever wondered what MacArthur Park is all about. I hope you know now as I wrote about it on this website back in October 2011. It does have a story. What about Zoom by Fat Larry’s Band? No, not sure about that one yet! This week’s subject is possibly one you’ve never thought too closely about as it’s become a classic over the years and most will know most, if not all the lyrics. But according to the song’s co-writer, who compares it to an episode of The Twilight Zone, where says it jumps from one scene to the next and doesn’t necessarily make sense. He says the success of the song comes from the audience creating stories in their minds based on the images. That song is Hotel California.

As explained by my Number One’s co-author, Spencer Leigh, The Eagles took over from the Beach Boys as the only key exponents of California Rock, and like them, they became the victims of the California lifestyle. The Eagles formed in 1971 and the line-up altered a number of times of the years, but Don Henley and Glenn Frey were the mainstays. As it happens only two member were actually from California and they were later member Bernie Leadon and Timothy B. Schmit. Joe Walsh came from New Jersey, Don Henley was from Texas, Glenn Frey was from Detroit, and Don Felder was from Florida. By 1976 the line-up was Henley, Frey, Don Felder, Joe Walsh and Randy Meisner and they teamed up with producer Bill Szymczyk and recorded the album Hotel California.

The song has a few different interpretations, Don Henley put it this way: “We were all middle-class kids from the Midwest. Hotel California was our interpretation of the high life in Los Angeles. It’s a song about the dark underbelly of the American Dream, and about excess in America which was something we knew about.” In 2013 another interpretation was explained by Henley in the History of the Eagles documentary: “It’s a song about a journey from innocence to experience.”

The song was written by Don Felder, Glenn Frey and Don Henley but the order of the names had its share of problems. Henley recalled, Felder had some problem with how the credits were listed on this new version – the original single had the composers as Don Felder, Don Henley and Glenn Frey, implying that Felder wrote most of the song and Frey the least.” The new version was credited to Don Henley, Glenn Frey and Don Felder. Felder claims that Henley and Frey added nothing original to the new version, and that this was simply a power play.

Don Felder came up with the musical idea for the song. According to his book Heaven and Hell: My Life in The Eagles, he claims he came up with the idea while playing on the beach. He had the chord progressions and basic guitar tracks, which he played for Don Henley and Glenn Frey, who helped finish the song, with Henley adding the lyrics. Felder says they recorded the song about a year after he did the original demo, and in the session he started to improvise the guitar part at the end. Henley stopped him and demanded that he do it exactly like the demo, so he had to call his housekeeper and have her play the cassette demo over the phone so Felder could remember what he played.

The Eagles aimed for a full sensory experience in their songwriting. Felder explained, “When we try to write lyrics, we try to write lyrics that touch multiple senses, things you can see, smell, taste, hear. ‘I heard the mission bell,’ you know, or ‘the warm smell of colitas,’ talking about being able to relate something through your sense of smell. ‘The warm smell of colitas’ has often been interpreted as sexual slang or a reference to marijuana, but Don cleared that up in an interview with Song Facts, “The colitas is a plant that grows in the desert that blooms at night, and it has this kind of pungent, almost funky smell. Don Henley came up with a lot of the lyrics for that song, and he came up with colitas.”

The line ‘They stab it with their steely knives but they just can’t kill the beast’ is a reference to Steely Dan. The bands shared the same manager (Irving Azoff) and had a friendly rivalry. The year before, Steely Dan included the line ‘Turn up the Eagles, the neighbours are listening’ on their song Everything You Did.

The music may have been inspired by the 1969 Jethro Tull song We Used to Know, which appeared on the their album Stand Up. The chord progressions are nearly identical, and the bands toured together before the Eagles recorded Hotel California. Ian Anderson holds no grudge and stated in a Song Facts Interview, “It’s difficult to find a chord sequence that hasn’t been used, and hasn’t been the focus of lots of pieces of music. Its harmonic progression is almost a mathematical certainty you’re gonna crop up with the same thing sooner or later if you sit strumming a few chords on a guitar. There’s certainly no bitterness or any sense of plagiarism attached to my view on it, although I do sometimes allude, in a joking way, to accepting it as a kind of tribute.”

The song began as a demo tape which was submitted by Felder and was called Mexican Reggae. It was Henley who changed the title to Hotel California after he’d written the lyrics. “A theme developed for the album,” Felder said as he explained how some of the other songs fit in: “Once you arrive in L.A. and you have your first couple of hits, you become the New Kid In Town, and then with greater success, you live Life In The Fast Lane, and you start wondering if all that time you’ve spent in the bars was just Wasted Time. So all of these other song ideas kind of came out of that concept once the foundation was laid for Hotel California. It was a really insightful title.”

The hotel on the album cover is the Beverly Hills Hotel, known as the Pink Palace and was regularly frequented by Hollywood stars. The photo was taken by photographers David Alexander and John Kosh, who sat in a cherry-picker about 60 feet above Sunset Boulevard to get the shot of the hotel at sunset from above the trees. The rush-hour traffic made it a harrowing experience.

The song, which ran to just over six and a half minutes, reached number eight in the UK but topped the American single chart. It won the 1977 Grammy for Record of the Year but the band did not show up to accept the award, as Don Henley did not believe in contests. Timothy B. Schmit, who had just joined the band, said they watched the ceremony on TV while they were rehearsing.

The band split up in the summer of 1980 and when asked if they would ever think about getting back together, Henley “not until Hell freezes over.” But they band did reunited in 1994 and recorded an even longer live, acoustic version of the song for an MTV special that was included on their album Hell Freezes Over. Don Felder came up with a new guitar intro for this version the day they recorded it, and while it was not released as a single, it got a lot of airplay and helped the album top the charts the first week it was released, and was nominated for a Grammy for Best Rock Performance by a Duo or Group with Vocal.

Felder was fired from the band in 2001 after disputing payments and royalties, but quickly responded by filing two lawsuits alleging wrongful termination, breach of implied-in-fact contract and breach of fiduciary duty and was seeking $50 million in damages.

On the up-side, in 1998 all seven members performed a live version of Hotel California when they were inducted into the Rock and Roll Hall of Fame

According to Rolling Stone magazine, Don Henley said that the band was in pursuit of a note perfect song. The Eagles spent eight months in the studio polishing take after take after take. He added, “We just locked ourselves in, we had a refrigerator, a ping pong table, roller skates and a couple cots. We would go in and stay for two or three days at a time.”

Another 13 years had passed until they released their next album which was Long Road out of Eden in 2007 but in the U.S it was only available via the band’s website, at Walmart, and at Sam’s Club stores, everywhere else in the world it was available via all the traditional outlets.

In February 2013 they released a documentary called History of the Eagles and engaged in a supporting tour with 11 arena dates. Henley said that the tour, which would continue until 2015, “could very well be our last…we’re gonna include at least one former band member in this tour and kinda go back to the roots, and how we created some of these songs. We’re gonna break it down to the fundamentals and then take it up to where it is now.”