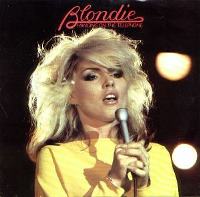 Oh, how times have changed with technology. Long before email and mobile phones with text facility, the quickest way to communicate was by telephone. Before answering machines were invented in 1935 you’d have to hang up and try again later and I’m old enough to remember that it was quite frustrating sometimes. This song is all about waiting for that long-awaited call back on a public phone which you had to hang around just in case that call came. Blondie made this song famous in 1978, but the song began life before that.

The song was first recorded by a Californian group called The Nerves who were led by their primary songwriter, Jack Lee. In 1976, they recorded just one EP which contained four tracks which were Hanging on the Telephone, When You Find Out, Give Me Some Time and Working Too Hard and released on their own label. They had so little money and the EP didn’t sell enough to cover their costs and they were on the verge of breaking up. The song is memorable for its ringing sound effect intro and the Nerves’ version opened with a single American ring tone before launching the song at break neck speed.

Lee was in trouble because he couldn’t afford to pay his bills and was on the verge of being disconnected, but just before it was, his phone rang and it was Debbie Harry asking if she could record Hanging on the Telephone. Naturally, Lee instantly agreed, and Blondie’s producer, Mike Chapman, described the song as ‘magic from the beginning’. Blondie’s version was recorded with a double British telephone ring but a similar pace. Lee recalled, “I remember the day vividly, it was a Friday and they were going to cut off our electricity at six o’clock, the phone too. Luckily, Harry got through before they did.”

When Blondie came to record the song, they changed the gender as Lee sings, ‘I’m in the phone booth, it’s the one across the hall, if you don’t answer, I’ll just ring it off the wall, I know he’s here but I just had to call,’ whereas Debbie sings ‘I know she’s here but I just had to call.’ Blondie did exactly the same with their debut hit Denis (Denee) which was first recorded by the all-male group, Randy and the Rainbows.

Blondie’s version was so similar to The Nerves version it makes you wonder why their version never made it, but the fact that Lee, as the songwriter, made money and managed to remain connected would have been enough. Lee did recall of the song’s brilliance, “Even people who hated me – and there were plenty – had to admit it was great.”

Hanging on the Telephone is the opening track on Blondie’s million-selling album Parallel Lines and the second song, One Way or Another, is along the same lines and another uptempo song about a stalker.

← Stop the Cavalry (Jona Lewie)
Walk Like An Egyptian (Bangles) →

2 comments for “Hanging on the Telephone (Blondie)”