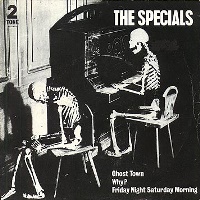 John Jones emailed to say that the second half of 1981 was memorable for him for two reasons, on the happy side it was the wedding of Charles and Diana and on the unhappy side was the riots across the UK which inspired the song Ghost Town, but, he asks, was there any specific part of the atrocities that sparked the idea. Let’s find out.

Towards the end of the 1970s, punk gave way to New Wave, a fairly short-lived, but popular, genre  which then gave way to the mod revival which soon became known as the 2Tone phenomenon and it was the brain child of Jerry Dammers who, in late 1977, formed a reggae/punk/ska band in his native Coventry and were known as the Coventry Automatics then the Coventry Specials before settling on the Special AKA.

He set up the group’s own 2Tone label with a logo which was based on a photo of reggae star Peter Tosh that Dammers found and he gave it the name Walt Jabsco which came from a bowling shirt that Dammers bought in a charity shop and had that name on it. Within a few months he’s also signed The Beat, Madness and the Bodysnatchers. Their debut hit was Gangsters went to number six and then they trimmed their name omitting the AKA although it would returned for various later hits including a duet with Rhoda from the Bodysnatchers and the 1984 hit Nelson Mandela.

Jerry Dammers’ inspiration for the song came from scenes noted during their UK tour, as he recalled in an interview in Mojo, “In Liverpool, all the shops were shuttered up, everything was closing down. In Glasgow there were little old ladies on the streets selling their household goods – it was clear something was wrong.” Dammers explained the wailing sirens at the start and end of the song, “they’re supposed to sound a bit middle eastern, like a prophecy of doom.” The lyric, ‘All the clubs have been closed down,’ specifically refers to the Locarno Ballroom in Coventry.

It was a police raid in the St Paul’s area of Bristol that sparked rioting which then spread to Toxteth in Liverpool, Brixton in South London and various other deprived inner-city areas. It was a coincidental and perfectly timed number one. The Tories were halfway through their first term in office and while the Yuppie revolution was under way, social services and housing were already feeling the blade of the Thatcherite knife. Everyone was experiencing the atmosphere of social unrest. This included me personally when I was on my way back from DJing at a club in Streatham and whilst stationary at some traffic lights in Brixton I saw, in my rear-view mirror, a large group of terrifying people running towards my car lobbing bricks and various other dangerous looking objects. ‘Sod the red light, ‘ I thought and floored it. I was in Central London in seconds it seemed.

It turns out that the song had another inspiration. Just prior to putting pen to paper, three members of the band decided to quit; Terry Hall, Lynval Golding and Neville Staples all left to form the Fun Boy Three and so, “Ghost Town was about the breakup of the Specials,” Dammers said. “It just appeared hopeless. But I just didn’t want to write about my state of mind so I tried to relate it to the country as a whole.”

Jerry Dammers continued with the remaining members, Horace Panter, John Bradbury and newly recruited ex-Bodysnatchers lead singer, Rhoda Dakar. He also reverted to the band’s original name, The Special A.K.A. The band split in 1984 and a brief reformation in 1996 went unnoticed. Jerry Dammers was also behind the free 1988 Artists Against Apartheid concert at Clapham Common and also worked as a DJ in London.

In April 2014, he received the South African Order of the Companions of O. R. Tambo in silver award for his role in the anti-apartheid movement. “It feels fantastic. It is a real honour to be considered for this, especially when I compare what little I did to the work of those who sacrificed their lives, I am humbled,” he said. This was featured in the 2000 Guy Ritchie-directed film Snatch which starred Jason Statham and Brad Pitt.

In 1995 Terry Hall released his Rainbows EP with guest artists, Damon Albarn and Ian Broudie. Bizarrely, on it there is a revamped, live version of Ghost Town featuring the rapper Tricky on lead vocals, but the eerie atmosphere of the original was never going to be recaptured.