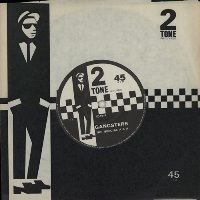 This week’s ground-breaking debut hit was rejected by numerous record companies so the band decided to finance it themselves, so, with the help of a local businessman who invested £700 and the track was recorded. That was only enough money for one track so an instrumental was stuck on the B-side and the sleeve was stamped with The Special A.K.A Gangsters vs The Selecter by the band themselves and 5000 copies pressed up and its success launched the two-tone craze.

The band were originally formed in 1977 by primary songwriter and keyboard player Jerry Dammers as Automatics then the Coventry Automatics. The original singer, Tim Strickland was soon replaced by Terry Hall and they were joined by guitarist Lynval Golding, bass player Horace Panter and within a year Neville Staple was added and their named changed to the Special A.K.A although virtually no one called them that. They got their first break after The Clash’s Joe Strummer saw them live and invited them to be their support act.

Dammers wrote Gangsters although much of it is a reworking of Prince Buster’s 1964 classic, Al Capone – he even used the car screeching sound effect that opens the original. The opening line on the original is, ‘Al Capone guns don’t argue’, which Gangsters changed to, ‘Bernie Rhodes knows, don’t argue’ – a jibe at their original manager and dodgy managers in general. Lynval Golding explained, “The line ‘Can’t interrupt while I’m talking, or they’ll confiscate all your guitars’ comes from a hotel incident. My line in the song was ‘They use the law to commit crime.’ Everything in Gangsters was about that trip, and it was a brilliant trip in the end because it gave us our first hit record – can’t complain about that.” So what was the hotel incident? The Specials had done a small tour in France and there was damage in the hotel that a different British band had caused, but the Specials were being blamed. The hotel’s manager had seized their guitars as ransom until the Specials had paid for the damage. The situation got a little out of hand the police were called.

Initial copies of the single were credited as The Special A.K.A and has a paper label and the definite ending whereas later copies credit it as the Specials, had the label stamped into the vinyl and the song fades out rather than ends. It was the first issue on the newly launched Two Tone label which got its name from the black and white suits worn by the original ska stars back in the 1960s. The label’s logo has a story of its own and to find out what that is, you’ll have to refer to the Ghost Town entry from October 2022. They officially changed their name to The Specials but later did revert back to The Special A.K.A for the 1984 hit Nelson Mandela.

The song reached number six in the UK but they never managed to crack America, this apparently was due to the fact that there was no ska category in American record shops and they had no idea how to file them because it wasn’t punk, new wave nor reggae. The band’s first two albums featured a few well-known names as backing singers including Belinda Carlisle and Chrissie Hynde. The band split in 1982 but reformed in 1984. Terry Hall embarked on a solo career. In 2008, Lynval Golding, Horace Panter and Terry Hall reformed again with various touring musicians and that line up remains the same until Hall’s untimely death on 18th December 2022 which the press gave an unusually large amount of coverage to which does make a pleasant change because it gave an interesting insight to Hall’s early life which was not common knowledge before.

Since their formation in 1977, 35 different musicians have passed through the Specials, that’s pretty special.

← Jeff Beck
Most weeks at number one in Spain →