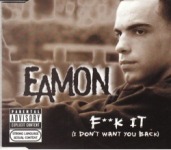 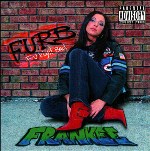 The first known use of the F-word was in 1503 in the poetry of William Dunbar and so when Eamon,who was the first to include it in the title of a number one hit, it could have been paraded as the 500th anniversary edition. The word was banned from broadcasting for many years and the first person to say it on the BBC was the theatre critic, Ken Tynan, in an arts programme in 1965. The generally held view is that John Lennon was the first person to include the word in a song which he did on Working Class Hero in 1970 but surprisingly Al Stewart, had beaten him to it with his song Love Chronicles a year earlier.

Eamon’s regretful song after discovering that his girlfriend was cheating on him was a soul ballad that combined Smokey Robinson with rap. The 20 instances of the F-word were bleeped for airplay by taking the word and reversing it whenever it occurred, giving the record a curious splicing sound. The six instances of shit were bleeped and also the reference to head, although that had been permitted in Lou Reed’s Walk On The Wild Side some 20 years earlier. The recent US black term for a prostitute ‘ho’ is permitted, and so Eamon has called his music, Ho-Wop.

The song that knocked Eamon off the top was his ex-girlfriend, Frankee who wanted to get back at him after they’d split. The question at the time was, was it a massive publicity hype or the real thing? One will never really know even now, exactly 10 years after the event. After Eamon recounted the problems with his girlfriend, instead of suing him, the stunning-looking Frankee thought she wouldn’t get mad, but get even. She retaliated with F U Right Back, which, amongst other things, said that she was faking orgasms and accused him of having pubic lice (surely a first for a number one record)? Lyrically she says, ‘You thought you could really make me moan / I had better sex alone’ and ‘I’m glad I didn’t catch your crabs.’ Nice!

Eamon was said to be surprised by her outburst, but, how come Frankee was allowed to use the same backing track and simply write new words to Eamon’s song? As it stands, Eamon’s name is on a song which portrays him as a lousy lover. So let’s just say, in a manner of speaking, they are in bed with each other.

Frankee, who was born Nicole Francine Aiello but uses the name Frankee because it was her grandfather’s nickname, began singing at age of six and she was taking both singing and dancing lessons as a teenager. She went to the University of Tampa but left after a year to continue singing in New York. Her instincts were correct and her demo tapes led to offers from several record labels. What’s more, she had been recording long before Eamon. She had been working with several well-known songwriters and producers for her debut album, which was about her relationships and her friends’, The Good, The Bad and the Ugly. She commented at the time, “The most important thing is that the material had to be great and that the songs had an authenticity, a believability about them. I’m a 20-year-old living in New York so I’m bound to have seen and been through some stuff because New Yorkers generally are exposed to a lot.”

On both Eamon and Frankee’s CD singles, there were several versions on the song on the CD single; the dirty version, the clean version and various other mixes and remixes. Eamon’s song did very well in America making the top 20. Frankee’s reply stalled at number 63. His album, I Don’t Want You Back, included the titles Get Off My Dick and I’d Rather F*** With You, but his follow-up single, Love Them, which sampled The Flamingos’ I Only Have Eyes For You, had no swear words and missed the Top 20 completely! Eamon promoted the album on stadium dates, opening for Britney Spears. “I come from a nice home,” he said, “I’m not talking about gang-banging or guns or stuff like that because that’s not what I’m about.” Frankee, who is 2006, signed with Big Management and released the single Watch Me as a digital download only. When the track flopped she was immediately dropped. She later did some modelling for FHM and Maxim magazines.

Radio One breakfast DJ, Chris Moyles, who really believed it was an elaborate marketing ploy by their record labels, recorded his own spoof version called We Want You to Leave which he gave extensive airplay to on his show.