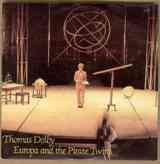 “I think something that set me apart was that I could have been a conventional songwriter, with piano and voice. I’m nothing special as a pianist or as a vocalist, so I needed a wider palette to express myself with. I’m not a song and dance man, like Elton John,” admitted Thomas Dolby, the man behind the Europa and the Pirate Twins which is this week’s Single of the Week.

Thomas was a sound pioneer in the early eighties daring to try things that few others dared back in the analogue era. He was born Thomas Robertson in London and not Cairo as NME and Smash Hits once stated. His father was a professor and a young Thomas was moved around between Greece, France and Italy as a child. He knew by the time he’d reached his teens years that he wanted to work in a creative field, but was unsure in which field be it a writer, actor, musician, producer or director. Wikipedia states that he completed his A-levels but Thomas once said, “I sang in a choir and learned to sight-read single lines, but other than that I don’t have a formal education.” He continued, “I kind of fell into music because it didn’t require a lot of entry qualifications. I picked up the guitar initially, playing folk tunes—Dylan mostly, then I graduated to piano when I got interested in jazz, listening to people like Oscar Peterson, Dave Brubeck, Bill Evans, Thelonious Monk, and so on. The first electronic instruments started to become accessible in the mid-70s and I got my hands on a kit built synthesizer and never looked back.

He wanted to change his name because Tom Robertson sounded too much like Tom Robinson who was already making a name for himself. He kept his full first name, but it was friends who nicknamed him Dolby after the audio noise-reduction process created for tapes in the 1970s. He signed a deal with EMI Records and his debut single was Europa and the Pirate Twins. “People thought electronic music was a novelty, so I felt it was my role to show them its potential,” he exclaimed. Even though technology was much more limited back then he never felt limited as to what he could do. He explained how it was back then, “I did have the background, and I did have that compositional and arranging skill. Whereas a lot of people who play with machines got into it without much of a musical background, and were able to get the machine to express something to get themselves across in that way. In my case, I could have written conventional music on musical instruments, but instead I chose to work with these devices. The difference, really, was my songs were really songs. You’re hearing unusual sounds and arrangements, but the underlying compositional backdrop was quite a conventional one.”

Europe and the Pirate Twins’ inspiration came from World War II and tells the story of two young sweethearts, one 12 and the other 14 who, because of the circumstances, are forced to part company. On that fateful day he vowed that one day they would be together again. Nine years passed and one day he sees her…..on the cover of a magazine. She is now 21 and is an actress and singer. He so wants to be back with her, but he can’t get to her. The infatuation is still there and he goes out and buys all her music and sees all her films but he knows it’s not the same. One day he caught a glimpse of her in London and while he ran towards her he gets stopped by her bodyguard who obviously thinks he’s some kind of nutcase and then she was gone…forever.

The song, which features XTC’s Andy Partridge on harmonica, only reached number 48 in the UK chart and its parent album, The Golden Age of Wireless, stalled at number 65. In 2009, a greatest hits called The Singular Thomas Dolby was released and in the sleeve notes Europa was referred to as ‘a semi-autobiographical romp’.

Thomas turned his hand to writing a couple of films; in 1985 he composed the score to Fever Pitch which starred Ryan O’Neal and the following year scored Ken Russell’s Gothic. In 1992 he founded the computer software company Headspace in Silicone Valley, releasing The Virtual String Quartet as its first program, and also pioneered technology for music on mobile phones. Did he enjoy doing film work? Thomas: “You can spend days writing one little theme for a love scene, and then the love scene has to go so it’s on the cutting room floor and the studio owns it, so it’s kind of tough. When you’re working on a computer game, the team is smaller and the budget is smaller, you tend to be left to your own devices more.” Two years later he released The Gate to the Mind’s Eye, a soundtrack to the animated short film Mind’s Eye. For most of the 90s Thomas was occupied with his software company although did return to live performing in 2006.

These days he still makes music, but still wants to be involved with films but is fussy as to what he takes on, “It’s really hard because it looks good on paper but at the end of the day it’s not something you want to be involved in and it makes me appreciate how lucky I am with my records, that I can just have this vision and a year later it’s in the stores on the shelves. I really appreciate that freedom, which in a movie you just never have.”