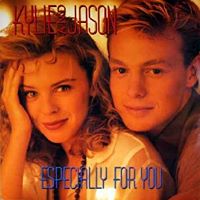 Earlier this year it was announced that Neighbours was coming to an end after 32 years in the UK. More announcements followed including the re-release of Especially For You on both limited editions of vinyl and cassette and also that both Kylie and Jason would be returning to Ramsey Street to make a final special appearance together. But how did this song come together in the first place? Let’s find out.

In 1988, Kylie followed I Should Be So Lucky with three number two hits, Got To Be Certain, a re-recorded version of The Locomotion and Je Ne Sais Pas Pour Quoi, which were all lifted from her debut album, Kylie. When the album made number one, Kylie set two new records. She became the youngest female artist to have a number one album and, with its sales of 1.8 million, the biggest selling debut album by a female.

In the UK, Neighbours was 18 months behind Australia and the UK viewing figures were phenomenal which, in turn, helped Kylie’s pop career. But the pinnacle of their acting careers came in October 1988, when Charlene (Kylie) married Scott Robinson (Jason Donovan) in what was publicised as ‘The wedding of the year’. The kissing scenes came naturally as the couple were dating in real life. Accompanying the pair down the aisle was the song Suddenly, performed by Angry Anderson.  Such was the demand for the record, that it was released as a single giving the former lead singer with Aussie hard rockers, Rose Tattoo, a number three hit. The wedding made such an impact that Kylie’s wedding dress was put on display in London’s Museum Of The Moving Image.

Mike Stock, Matt Aitken and Pete Waterman had written the majority of both Kylie and Jason’s early hits and this song was no exception. Pete Waterman, who is generally the spokesperson for the trio, said in his autobiography, I Wish I Was Me, “Because we were working with both Kylie and Jason, who were romantically linked, there was inevitably a feeling amongst the public that we’d have them do a romantic duet together. We’d known from the beginning that they were going out, but the idea seemed a sickly proposition.” Pete met Matt at Heathrow Airport and the pair flew to Sydney and sat up all night writing the lyrics. “We didn’t actually sing the duet together,” recalled Jason. “We had to learn the song very quickly and recorded our parts separately.” After 10 hours of recording, Pete and Matt flew straight back to London. When I heard the finished version, I hated it. It had absolutely no passion. Mike hated it and everybody I played it to in the office hated it,” admitted Pete. “But it was going to be a smash because of who was singing it.” Mike Stock spent four hours remixing it, but they still weren’t happy. Then Pete had a go and as he remembered, “somehow it came together at the last moment; so, we rushed to the pressing plant and got it out in time for Christmas.”

In actual facts, it missed the Christmas sales week and got to number on the first week of 1989 where it stayed for three weeks. A cover version by the unromantically linked Johnny Vaughan and Denise Van Outen was recorded in 1998 for the BBC’s Children In Need appeal. It reached number three in the UK chart probably helped a bit by the fact that it was Steps on backing vocals.

On her 2001 show An Audience with…Kylie, after giving the song a big build up, asked the audience to welcome an old friend. As the orchestra played the opening bars of Especially For You, the audience found themselves applauding Kermit the Frog.