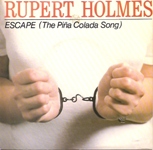 “I’m the stuntman of romance and I’ve been falling in love since I was three,” so said Rupert Holmes, the man who began his career in the sixties by arranging songs for the Platters and The Drifters. He wrote many songs anonymously in the bubblegum era which is where he learnt his craft. He knew that he could write great songs, but for some reason they didn’t interest the public, but he never gave up.

Rupert was born David Goldstein in Northwich in Cheshire in 1947, his father was a United States Army warrant officer as well as a bandleader and they moved back to the States when Rupert was six.

In the mid seventies he was writing songs for artists like Barry Manilow, Dolly Parton and Judy Collins and in 1974 his debut solo album, Widescreen, was released in the US and included witty songs done in an amusing musical way. Barbra Streisand discovered the album and asked if she could use a couple of the songs for her latest movie, A Star Is Born. This inspired him to keep writing and recording.

His most well known song was Escape, (The Pina Colada Song) which he’d written the music for about three years earlier just for his own amusement and called it People Need Other People, but then left it. One day he decided it was time to dust if off and add the lyrics. He’d already planned his fifth album which was called Partners in Crime and it was predominantly full of ballads so decided he needed an up tempo song.

Then came the recording, Rupert explained, “The drummer, Leo Adamian, suggested we have two drummers on the session because it was an interesting beat that was hard to pull off with one drummer, so we got the second drummer and we did one take of the tune. It had some very interesting chord changes and changed key several times, and I’m singing away this lyric, ‘people need other people.’ and then we go in to hear back the first take and we listen to the cut, and I say ‘you know, we can definitely do better than this,’ and I look and I see that the second drummer was unconscious from having too much fun. We were able to wake him up and get him into a taxi, and that was that, we weren’t going to record any more of that track. I figured I’d just put the song away – I wasn’t that crazy about the lyric anyway.

But I desperately needed an up tempo song on the album and the budget was getting low and I wasn’t sure what to do. That’s when we did something that now is pretty commonplace but was pretty unusual at the time – we did a very primitive version of sampling. I found there were 16 bars of music on that first take that were very tight, everybody was in a very nice groove on it. So we duplicated those 16 bars onto another multitrack master over and over again and edited them all together. I think there were 60 edits to make up a reel that was five minutes long of this 16 bar vamp. I went through a million lyrics in my head. I wrote one song that went ‘that’s the law of the jungle in the school of the street, you get out of the kitchen if you can’t take the heat.’ I thought it sounded too much like a Billy Joel song. I wrote another one: ‘everyone needs a victim, I believe you will find, when you’re cruel to another, when you’re cruel to be kind.’ Right as I did that, I remembered there was a hit record out called Cruel to Be Kind by Nick Lowe, so I couldn’t use that. Now it’s the day before the last scheduled day of recording and I have no lyrics I was happy with. Because the song is just this steady vamp, I realised that I’ve got to make the lyrics the focal point of the song because the music is repetitive. I was in my apartment and there was a copy of The Village Voice. Sometimes I look at personal columns to get ideas for songs because people fascinate me. I saw this ad that a woman had placed in which she described herself in such glowing terms that I thought to myself, ‘why on earth, if you’re this wonderful, do you need to place an ad in the personal columns?’ Trying not to be cynical, I thought, ‘Let’s be fair, maybe she’s just looking for an adventure. Maybe she is as wonderful as she says, but she likes the idea of meeting a stranger and seeing what fate has in store for them. She wants something out of the ordinary.’ Then I thought to myself, ‘what would happen if I answered this ad,’ and I thought ‘with my stupid luck, I would answer the ad and find out it had been placed by the woman I was living with, never realising that she was bored with me. ‘”

“I purposely made the narrator vain,” he revealed, “He said he’s tired of his lady, yet she’s the one who placed the ad. He was not sensitive enough to pick up that she’s tired of him but then I wanted to make it happy resolution, so I came up with the idea, ‘Gee I was looking for this escape and you were looking for it too, so maybe we have more in common than we allowed ourselves the chance to find out. The song initially made no reference to the tropical drink, the original line was, ‘if you like Humphrey Bogart and getting caught in the rain’ but the first time I put the music on the stand and started singing it, I realised it didn’t sound right. So I’m thinking, this song is about a fellow looking for a fantasy, an escape and that conjured up the image of a fantasy island and drinking from a hollowed-out coconut with flags of all nations sticking out of it. So I started thinking of tropical drinks, Mai Tai? Daiquiri? Pina Colada? That’s it, that’s the one and it substituted Humphrey Bogart nicely. Everyone has in their mind what a bar called O’Malley’s looks like. I have one in my mind and that’s where it came from. There’s an O’Malley’s bar near where I live, but I didn’t discover there was such a bar until after I’d written the song. It could have been O’Grady’s. Everyone knows an Irish bar where people might meet each other, and I’d like to think that the one you envision is different than the one I envision. There was no specific O’Malley’s.”

The story sort of took hold of my mind. People always ask me if it was based on something true, and I know they would love to know it was based on a true incident, but it wasn’t, it was based on the ‘What If’ scenario that I conjured up in my mind that evening.”

When it came to the recording he ad-libbed a harmony track a third above himself on the chorus, then left the song and came back the next day to record the proper vocal. When he came back to do the perfect vocal, he could not get the energy, excitement and enthusiasm he had singing it that one time straight through. Rupert: “I said, ‘These other vocals are more correct, but they’re not as much fun. I was having fun when I sang that through. I was kind of making up the phrasing as I sang it and it had more spontaneity, more energy.’ Jim Boyer, who was doing the album with me, agreed, and that became the vocal. When you hear The Pina Colada song, the story was written the night before, the line ‘If you like Pina Coladas’ was invented about 5 minutes before I started actually singing, and the vocal you hear is the first time I ever sang the song, and that became the vocal you hear on the record.”

Rupert thought the song Him, which was actually the follow-up, should be the first single from the album, but the record label liked this and convinced Rupert that they should release it first. They got it played on a radio station in Washington, and people started calling in to the station asking for it. The problem was that they were asking for The Pina Colada Song and the official title was Escape. This hurt sales because people would ask for ‘That song about Pina Coladas’ at record stores and the stores had no idea what they were talking about. The record label wanted to change the title to “Escape (The Pina Colada Song)” and told Rupert it wouldn’t sell if they didn’t, so he agreed.

They signed to the small independent Infinity label, but they went out of business as the song got near the top of the chart. Fortunately it had got high enough to make an impact and it was picked up by MCA. “The record vaulted up the charts,” Rupert said, “WABC-AM, which never played anything until it was top five everywhere else in the nation, played the record when it was number 60 in Billboard with a bullet (meaning the song is rising in the chart). It was jumping sometimes 15, 20 points a week and by December of 1979 it was a number one record, and it was also a number one record in January of 1980, so I can honestly say that it was at the top of the Billboard charts for two decades without interruption!”

“If I had ever known that it was going to be the song that I’d be most associated with, I might have had second thoughts about a lot of it. It was never meant to be heard 100 million times, it was meant to be a little short story with a little wink at the end of it.”

Is it a milestone round his neck? “I have a feeling that if I saved an entire orphanage from a fire and carried the last child out on my shoulders, as I stood there charred and smoking, they’d say, ‘Aren’t you the guy who wrote The Pina Colada Song?’ It’s tough when you have this one thing that pulls focus from all these other things that you’ve done, yet every songwriter lives to have a song that almost everybody knows.”

Whereas Rupert made up the whole thing after being inspired by an ad, for someone else it was actually a real scenario. There was a couple in Minnesota who began trolling chatrooms independently, met and fell in love online, and when they finally met in real life, they realised they were married to each other. Unlike Rupert’s tale this couple’s experience ended in an acrimonious divorce.

← Losing My Religion (R.E.M.)
These Boots Are Made For Walkin’ (Nancy Sinatra) →