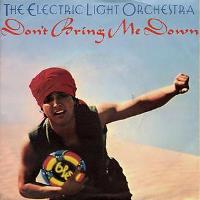 This week’s suggestion came from General Blee who wrote, “I heard Don’t Bring Me Down by E.L.O. yesterday after a long time and thought it would be good one to find out what it is all about. Just who is BRUCE?” Well General, there was no Bruce… initially but this song can be added to the many songs with misheard lyrics. There is a version, however, where Bruce does make an appearance. Let’s find out all about it.

This song was lifted from the Discovery album and was one of the last songs to be written for the album. The music came before the lyrics because the group’s lead singer, guitarist and primary songwriter, Jeff Lynne, revisited a song he had recorded much earlier in the session and decided to loop the drums track, slowed it down and looped it again to come up with backbone of Don’t Bring Me Down. Lynne was at Musicland Studios in Munich which is where he recorded the track and actually wrote the lyrics. This is the first E.L.O. song not to feature strings and it was allegedly suggested by the studio’s engineer, Reinhold Mack, although no evidence of this has ever been substantiated.

The last thing added to the song were the lyrics which were improvised, “I made up Don’t Bring Me Down in the studio, and I play all the instruments,” Lynne revealed in an interview with Rolling Stone. “It starts with a drum loop from another song, On the Run, which was also from Discovery – that I sped up. I then compressed the shit out of it.”

The biggest mystery that surrounds the song is the seemingly made up word – Groose or Bruce. “When I was singing it, there was gap in the vocals, so I just shouted out ‘groose,'” Lynne explained further to Rolling Stone. “It was a word that came to my head.” So how come the word stayed in the song? Lynne explained in an interview with VH1’s Storytellers, “The engineer was German and he said, ‘How did you know that word?’ I said: ‘What word?’ And he said, groose. It means greetings in German.’ I said, ‘That’s good. I’ll leave it in.'”  Now groose can, and does, sound a lot like Bruce and after so many people bombarded Lynne with the question, ‘Who is Bruce’ he decided to change the words and used Bruce for many live shows. “We started going on tour and every time we played it everyone used to sing ‘Bruce,'” Lynne told Best Classic Bands, “so I said ‘Ah, f*ck it, I’ll sing Bruce as well!'” Fans probably didn’t know he’d changed it just for the shows and thinking they could hear it clearer it was then believed that it was the real lyric.

The first single released from the Discovery album was Shine a Little Love across Europe and the U.S.A., Don’t Bring Me Down became the follow-up except in the UK where The Diary of Horace Wimp was chosen as the next single. Don’t Bring Me Down fared well in most parts of the world and was then rush-released in the UK. It became the Orchestra’s highest charting hit in the US and UK reaching number four in both countries – apart from the Olivia Newton-John collaboration on Xanadu.

Interestingly, another little joke Lynne added to the single was the pointless count-in intro. This is only used for bringing the band in together, but there was no band as Lynne played all the instruments himself and the drum loop was already made.

The song has featured in an episode of Dr Who in 2006 and in Family Guy six years later. It has also appeared in a couple of film including Donnie Brasco (1997), The In-Laws (2003) and a newly recorded version which was heard in College Road Trip in 2008. It was also used in the trailer for the 2017 film The Emoji Movie.

Now something you may not have noticed is a sound effect at the very end of the song. On the single version, after the echoed ‘down’ fades there is the sound of a door closing. It is intentional and is indeed a door slamming – it’s the fire door at Musicland studios which was probably added as a gag to indicate that the musicians and crew had left the building as it’s the track that closes the album.

E.L.O’s logo is the spaceship and this song had another connection to space. Around the time it was released in 1979, in order to boost a few sales, the band’s record label, Jet, launched a few ad campaigns across various music magazines by dedicating the song to the NASA Skylab space station which was about to re-enter the earth’s atmosphere after six years in orbit. Whether it boosted any sales is debateable, but exactly 17 years later, it featured again, this time for the Columbia mission. There was a delay of the landing because the landing site itself was experiencing some bad weather and it had to remain in space for a few more days. The morning they were due to arrive, Don’t Bring Me Down was the tune the astronauts awoke to that morning.

← The Ballad of John & Yoko (Beatles)
Under One Roof (The Rubettes) →