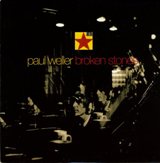 Very few musicians have success with one band, success with another and then as a solo artist. Paul McCartney would be the obvious name, but it’s not this week choice. This man had 18 hits with his first band in five and a half years, then 17 during the following six years and then a solo career which began in 1991 and has so far racked 38 hits. Paul Weller is the man in question and his tally to date is 73 hits and that doesn’t include guest appearances. Incidentally McCartney has had 98, Elton John has 87, Glee – 100, Elvis – 119 and Cliff – 134, and so he’s up there with the best but still a way to catch up. Paul has also had 24 hit albums with 1995s Stanley Road being the most successful with 87 week s on the chart and from it, let’s talk Broken Stones.

In an interview in 1998 with Paul Lester, Weller said of Stanley Road, “I was really surprised at the success of the album because it was quite dark. I remember playing the demo to friends and they were saying ‘take it off’. I was conscious that there were a lot of sweet tunes like You Do Something to Me and Times Passes so I wanted to add a darkness to the album. It was one of those records where everything came together; you had the songs which are always at the heart of it, we had the right studio, a great sleeve and it was a boom time for music. Bands were back and it was the right time for me – it was the most complete thing I’ve ever done.”

“We were very buoyant when we entered the studio,” he told Lois Wilson, “a lot of the material had been written up front. There had been a good year-and-a-half of playing on the road in between Wild Wood and the making of Stanley Road so I’d written at home, on the tour bus, in hotel rooms, wherever I could snatch the time, and we had a chance to play a lot of the songs in on the road.” The first single released from the album the Out of the Sinking which stalled at number 20 in November 1994, it was followed by The Changingman and You Do Something to Me and, finally, the fourth single was Broken Stones.

The song’s idea came from a conversation he was having with his son whilst at the beach. “He was asking me where all the pebbles came from, Paul explained to Daniel Rachel, “I told him we were all part of one rock before and we all got smashed down in time and splintered and sent around the earth. I don’t know if that’s true or not, scientifically, but that was my explanation to him anyway. But even if it wasn’t true, as a metaphor for us as a human race, human spirit, that we all come from one source and we just got splintered and sent round the world, there was a sense of spirituality that we’re all seeking to get back to that core again or get back home. So that spiritual element I married to the gospel accordion chords in it. It’s like an old gospel or spiritual tune to me.”

It’s a simple song that, like Sting’s Fields of Gold, could have been written at any point in time. A beautiful track with a gentle guitar and littered with rimshots and fits in with the other tracks on Stanley Road.

Weller had a further three number one albums after Stanley Road which were Illumination (2002), 22 Dreams (2008) and Sonik Kicks (2012) and he released two albums in 2017, the much-overlooked Jawbone the soundtrack to a film which starred Ray Winstone and Ian McShane and featured the wonderful song The Ballad Of Jimmy McCabe, the other was A Kind Revolution which peaked at number five.

Paul keeps his finger on the pulse of the current music or recent music scene, in 2014 he wrote a song for Olly Murs’ new album Never Been Better, the song was called Let Me In but Olly wasn’t sure about it at first. He thought it needed to be a bit more commercial and so changed some lyrics and recorded it. He said, “I rang Paul with my version, thinking he’d say no, but he loved it. That gave me a huge confidence boost.”