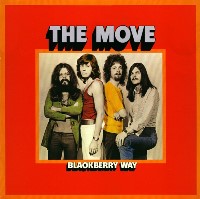 Many of the The Beatles songs were inspired by real life stories and the band have inspired hundreds, if not thousands, of musicians. Equally they took inspiration from others – it is well documented that it was The Beach Boys’ Pet Sounds album that inspired Sgt Pepper’s Lonely Hearts Club Band, but did you know it was a Beatles song that inspired this week’s suggestion? Read on.

The Move, which comprised lead singer Carl Wayne, singer and guitarist Roy Wood, rhythm guitarist Trevor Burton, bass player Ace Kefford and drummer Bev Bevan, were formed in Birmingham in 1965. They were signed by the London manager, Tony Secunda, who dreamed up outrageous, and wholly unnecessary, stunts to secure publicity. “We were a pretty wild band,” admitted Carl Wayne to Spencer Leigh, “We smashed up TVs and we had a bogus H-bomb in Manchester, but it worked against us. If we had had the guts to carry on with the infamy like The Stones, it might have worked but The Stones didn’t give a damn and we were frightened young boys from Birmingham. The Move was a very very good pop band, but we had to live up to this myth that we were aggressive louts.” Roy Wood added, “This worked against us, we’d smash up TVs on stage and then the promoters would ring up the agent and say that we had smashed up the dressing room so they didn’t have to pay us.”

Famously their 1967 hit Flowers in the Rain was the first song played (in full) by Tony Blackburn when he opened Radio 1 but the band received no money because Secunda decided to use an underhanded tactic to promote it, so without consulting any of the band he created a cartoon postcard showing the Prime Minister, Harold Wilson, in a compromising position with his secretary, Marcia Williams. Naturally the PM sued the Move for libel and the group lost the court case.

The Move charted 10 hits in the UK, nine of which made the top 20. It began with Night of Fear and ended in 1972 with California Man. It was The Beatles’ song Penny Lane that inspired their only chart-topper, the moody Blackberry Way, in 1969. Some cite it as the answer song to Penny Lane because of the similarity but with darker lyrics. When Roy Wood was once asked in an interview if he had been influenced by the famous Beatles song he replied, “I suppose it could have been. We were all very influenced by what The Beatles were doing because they were the best songwriters around.” It seems that it wasn’t only The Beatles who provided inspiration, check out the track Good Old Desk on Harry’ Nilsson’s 1968 album Aerial Ballet and you’ll see where the bridge comes from. Richard Tandy, a future member of ELO, played an electronic harpsichord on the song and musicologists have praised the E minor augmented ascent, which is the first sound we hear.

Ace Kefford left the band as he couldn’t stand the publicity and Carl Wayne moved out in a disagreement over bookings into cabaret clubs and later joined the Hollies. Wayne also recorded the song You’re a Star which was written by Tony Macaulay and was used as the theme tune to the talent show New Faces. Wayne died of oesophageal cancer in 2004 aged just 61. By 1971, Jeff Lynne joined and The Move were now a trio of Lynne, Wood and Bevan but after three further hits, Lynne and Wood formed the Electric Light Orchestra briefly before Wood moved on again to form Wizzard and not long before he was back at number one with their two chart-toppers See My Baby Jive and Angel Fingers. I last saw Roy at the 50th anniversary Radio 1 party in 2017 and he told me one or two stories that I won’t be writing about! Carl Wayne told Spencer Leigh, “I wish that Jeff and Roy had done more together. I think that the best Move records were after I left when they did Chinatown and Tonight. Lennon and McCartney were double genius, God’s talent, but Jeff and Roy together could have come close.”

The publicity for Blackberry Way was more restrained than usual as the press were sent blackberry pies with champagne. And was there a Blackberry Way? “Well, I’ve never spotted one,” admitted Roy Wood, “It would be nice to find one.”