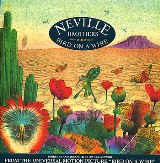 Sometimes it makes me wonder why such well-known or classic songs never get the chart recognition they deserve, good examples being Bruce Springsteen’s Born To Run (although a live version in 1986 reached the top 20), Matt Monro’s Born Free, Van Morrison’s Brown Eyed Girl and The Eagles’ Life In The Fast Lane. This week’s subject is a Leonard Cohen- penned song that only made the UK chart courtesy of a cover by the Neville Brothers in 1990, but it only reached number 72 and that song is Bird on The Wire.

Leonard Cohen, who was born in Quebec in 1934, has had a cult following for years, but his own chart success, as a performer, has been virtually zero. In America and Canada he has never charted a hit single but in the UK, he had a 100% improvement when, in 2008, on the back of Alexandra Burke’s winning performance on the X-Factor with his song Hallelujah, Columbia, Cohen’s label, issued his own version where it spent one solitary week on the chart at number 36. Even Jeff Buckley’s cover did better when it reached number two the same week Burke reached number one.

The first Cohen-penned song to make the UK chart was First We Take Manhattan, when a cover by Jennifer Warnes reached the dizzy heights of number 74. A cover of Lover Lover Lover by Ex-Echo & the Bunnymen lead singer Ian McCulloch reached number 47.

Leonard Cohen was born into a wealthy and much respected Jewish family with one of his grandfather’s was not only a rabbi, but he who also wrote a 700-page volume on the Talmud. The other grandfather was the founding president of the Canadian Jewish Congress. Leonard never really knew his father because he died then Leonard was nine.

Leonard loved to write poetry and whilst at McGill University in Montreal he was awarded the Chester MacNaughton Prize for Creative Writing for a series of four poems titled Thoughts of a Landsman. In 1956, at the age of 21, his first complete book of poetry, Let Us Compare Mythologies, was published by his former teacher and mentor at McGill, Louis Dudek.

After a brief spell at law school in New York, he realised that it was writing he loved best and so returned to Montreal to continue writing. Throughout the sixties he published various works including the 1966 controversial Beautiful Losers with some sexually explicit passages, but the book is still popular in his homeland and continues to sell.

In 1969 Leonard Cohen’s collection Selected Poems 1956-1968 was chosen for the Governor General’s Award for Literary Merit. This award is issued annually to mark Canadian achievement in various academic, artistic and social fields, the award is usually seen as an honour among Canadians. But, according the The Mail, Leonard claimed, “The world is a callous place and he would take no gift from it.”

In 1959 Leonard lost his grandmother and she had left him a substantial amount of money, so the following year, six days after his 26th birthday, he decided to buy a house….on Hydra, one of the Saronic Islands of Greece out in the Aegean Sea. It cost him $1,500 and once said, “It was the smartest decision I ever made.” The house had five rooms on several levels, but it was run down and had no electricity, plumbing nor running water, but it was his own tranquil   private space where he could work, either on the large riled terrace or in his music room on the third floor. In a letter he wrote to his mother at the time, he described his new home as follows: ‘It has a huge terrace with a view of dramatic mountain and shining white houses. The rooms are large and cool with deep windows set in thick walls. I suppose it’s about 200 years old and many generations of sea-men must have lived here. I will do a little work on it every year and in a few years it will be a mansion.’

Is was here that Bird on The Wire was created in 1968. From the Leonard Cohen files he explained, “When I first arrived in Hydra, there were no wires on the island, no telephones and no regular electricity. But soon telephone poles appeared, and then the wires. I would stare out the window at these telephone wires and think, how civilisation had caught up with me and I wasn’t going to be able to escape after all. I wasn’t going to be able to live this eleventh-century life that I had thought I had found for myself. So that was the beginning. Then he noticed that the birds came to the wires. The next line referred to the many evenings that friends and I climbed the endless stairs up from the port of Hydra, drunk and singing. Often you see three guys with the arms around each other, stumbling up the stairs and singing these impeccable thirds.”

He finished the song, which he describes as a simple country song, in a Hollywood motel on Sunset Boulevard in late 1968 and then offered it to Judy Collins who recorded the first version of it. In 1969 Leonard included his own version on the album Songs from a Room, an album which featured his long-term girlfriend, Marianne, on the back cover.

In 1972 Tony Palmer made a documentary recounting Leonard Cohen’s European tour and called it Bird on A Wire, which was never issued commercially, but has since been issued on DVD in 2010. In 1990 film director John Badham made a film with Mel Gibson, David Carradine and Goldie Hawn with the same slightly altered title Bird on A Wire, which is how most people have covered the song and it was the Neville Brothers who were chosen to sing it in the movie.

There is a well-documented story of the time in 1977 when Leonard was working with Phil Spector who produced the album Death of a Ladies’ Man, held a gun to Cohen’s head when he wasn’t quite singing the way Phil wanted. Leonard also had trouble in 1984 when he’d recorded the album Various Positions and Walter Yetnikoff, the head of Columbia records refused to let it be released telling Cohen, “Look, Leonard, we know you’re great, but we don’t know if you’re any good.”

In 2004 Leonard ran into financial trouble when his (so called) close friend and manager Kelley Lynch was suspected by Leonard’s daughter, Lorca, of financial impropriety. She advised her father who found out that his various bank accounts and trust funds he’d set up were empty. He also noticed that a credit card belonging to Lynch with a bill for $75,000 was paid off from Leonard’s account. In 2005 Leonard sued Lynch alleging that she had misappropriated over US $5 million from his retirement fund leaving him only $150,000. The following year a Los Angeles County superior court granted a civil suit is his favour and he was awarded $9m but apparently Lynch refused to respond to requests for her financial affairs and, as yet, Leonard has not received any money. Rumours in 2008 suggested that Simon Cowell chose Hallelujah for the X-Factor contestants in order to get Leonard some royalties, but to be on the safe side he went back out of tour.