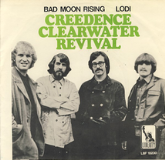 This week’s song was a big chart-topper towards the end of the sixties, but to another generation it’ll be best remembered for various films it appeared in especially the 1981 film American Werewolf in London. Unfortunately the band were often powerless to say what it did or didn’t get used in, “I objected to the song being strewn around on TV commercials and any old movie,” John Fogerty once said, “but we had no power in our contracts to veto where our music went. It was everywhere. And for every good movie that you’ve heard it in, there were at least 10 more that were awful.” That was one of the many things they had to endure without their own input.

Although their blend of rockabilly and country music conjured up a sound more suited to the Southern States, brothers Tom and John Fogerty were raised in the San Francisco Bay area and in 1959, along with bass player Stu Cook and drummer Doug Clifford, they formed a group called The Blue Velvets. During the British invasion, an executive at the label they were signed to, Fantasy Records, changed their name to The Golliwogs.

In 1968, they changed their name again, to Creedence Clearwater Revival. The first part after a friend of a friend of Tom’s, Credence Nuball, as Tom thought it invoked feelings of integrity, Clearwater originally came from a beer commercial, but it also mirrored the surging environmental development of the time and Revival was chosen for their goals and aspirations, that, after a decade of playing together, they could take themselves to new and greater musical heights.

Their first release, in 1968, was a cover of Dale Hawkins’ Susie Q which reached number 11 in the Billboard singles chart then there was a gap. John Fogerty recalled in an interview with Henry Yates, “At the start of 1969 we were walking the tightrope between fire and ice, we’d just put out Proud Mary, and in two weeks had gone from being one-hit wonders with Suzie Q (as they spelt it) to being on our way up. But I was looking ahead. I was desperately worried we were about to fall flat on our faces. In those days, you put out singles every few weeks, so when Proud Mary was on the radio I knew we had to write the next one.” So he set to work on Bad Moon Rising.

“I’d come up with the chords and melody and I got the phrase bad moon rising from this little book I’d kept song titles in since 1967. I didn’t even know what it meant, I just liked how the words sounded.” The song’s inspiration came from the 1941 film, The Devil and Daniel Webster, the story of a struggling farmer who makes a deal with the devil, Mr Scratch, to sell his soul in exchange for fame and prosperity. John continued, “The scene I liked is where there’s a devastating hurricane; furniture, trees, houses, everything’s blowing around. That story and that look really stuck in my mind and they were the germ for the song.” That hurricane, which wiped out most of a town inspired the line ‘I feel the hurricane blowin’, I hope you’re quite prepared to die.’ In an interview with Rolling Stone John said, “I wrote the song the day Richard Nixon was elected but it wasn’t written about the devil or the deal itself, but about the apocalypse that was going to be visited upon us.” It’s also an homage to the echo-drenched sound created by Sam Phillips at Sun Records in the fifties, although, John Fogerty admitted later, “I really couldn’t do it like Scotty Moore did it.”

Naturally, given the times with Martin Luther King and Robert F Kennedy having been recently assassinated, there was a subtext to the apocalyptic conditions; “I don’t think I was actually saying the world was coming to an end, but the song was a metaphor. I wasn’t just writing about the weather.”

Whilst at College, Doug showed an interest in nature and ecology and was nicknamed Cosmo. At his home in California he had a back yard where the band used to rehearse. The area, which was cramped as well as smoky, was known as the factory because Doug once complained that, although it was smoky and cramped, it was better than working in a factory.  Doug’s nickname and the rehearsal area gave their biggest selling album, Cosmo’s Factory, its name.

Tom Fogerty left the band in 1971 and the group disbanded 18 months later. Much to John annoyance, Fantasy Records continued to release old tracks, so in order to prevent this, and to be released from their contract with the label, John was forced to sign away royalties from their catalogue to label boss Saul Zaentz.  In 1985, John released a solo album called Centrefield in which he vented his anger towards Zaentz on a track called Zanz Kan’t Danz. The title was later amended to Vanz Kan’t Danz when Zaentz threatened to sue for deformation. Zaentz filed another lawsuit claiming that the lead track on the album, The Man Down the Road, was a rip-off of a Creedence album track Run through the Jungle. Effectively, John was accused of plagiarising himself. John was angry and in turn, John sued Fantasy Records to re-claim his legal costs and to prove that you cannot plagiarise yourself. John appeared in court with a guitar, he played both songs and the jury agreed that The Old Man Down the Road sounded nothing like Run through the Jungle. Mr Greed, another track on the album, was also directed at Zaentz.

In 1981, the film director John Landis felt the connotations of the song were perfect for some of the scenes in his comedy/horror movie An American Werewolf In London and was used to excellent effect in the scene were David Kessler (played by David Naughton) is awaiting a full moon and waiting to see if he will turn into a werewolf or not. It also appeared the following year in Twilight Zone: The Movie but not as memorably.

Tom died of respiratory failure in 1990.  John continued with a solo career and continues to perform his own songs on tour. In 1975, he wrote and recorded the original versions of Rocking All Over The World and Almost Saturday Night, which were hits for Status Quo and Dave Edmunds respectively.

Both Doug Clifford and Stu Cook continued to work together producing and playing on other people’s albums and in 1995 reformed their own version of Creedence Clearwater Revival but, two years later, John Fogerty objected and took out an injunction. It forced them to change the name to Cosmo’s Factory but they reverted after a court found in Cook and Clifford’s favour.

Zaentz has also made a name for himself as a film producer with credits that include One Flew over The Cuckoo’s Nest, Amadeus and, in 1997, The English Patient, which received nine Academy Awards. He also received the Irving Thalberg Award for lifetime achievement.

In his memoir, Fogerty admitted he borrowed the opening guitar lick for Bad Moon Rising from Scotty Moore’s work on Elvis Presley’s song I’m Left, You’re Right, She’s Gone. Fogerty claimed that he wasn’t trying to hide that he’d borrowed but actually “honouring it.” Apparently at an award ceremony in the eighties, Moore approached Fogerty from behind and said, “Give me back my licks!”