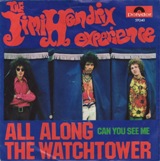 There are often disagreements about which is better, the cover or the original. I usually agree that it’s the original, especially if it’s a true or sad story based on a real life experience because that would have come from the heart. That’s looking at it from a lyrical point of view, musically it could be a different story. This week’s suggestion was certainly made famous by the cover version as the original was never released as a single, and the originator of it, whilst being one of the 20th century’s most prolific songwriters, he is no singer. After all, in 1985 many commented that this singer was well out of place on the USA for Africa charity hit, We Are the World. Yes, it’s Bob Dylan and his song All Along the Watchtower.

Lyrically, the song causes much confusion, whilst musically it’s so simple. Bob is never one to talk too much about his songs and the inspiration and the man who made the song famous, Jimi Hendrix, was similar. All Along the Watchtower started life in 1967 and originally appeared on Bob’s album John Wesley Harding. When interviewed at the time, Bob stated that it was, “the first biblical rock album.”

The song is a conversation between two people – in this case known as the Joker and the Thief. They seem to be moaning about the trials and tribulations about life and comparing the rich (the businessmen) with the poor (the plowmen). The Thief sympathises with the Joker who seems to have the problem and wants to escape from it all. He obviously hates the values of society. So who is the Joker and who is the Thief? Over the years many scribes have suggested that Dylan himself is the joker and Elvis Presley the thief, the reasons for this are that many African Americans accused Elvis of being a thief because a lot of his early music was influenced by black artists and the Joker represents Jesus on the cross talking to one of the two thieves which were crucified with Him. According to Kees De Graaf’s interpretation, he thinks a much more likely interpretation is that both the joker and the thief represent the two thieves that were crucified on either side of Jesus. Dylan calls one thief the ‘joker’ because in the same way like the chief priests, the scribes and soldiers standing around the cross did; he mocked and joked on Jesus saying: “So you’re the Messiah, are you? Prove it by saving yourself — and us, too, while you’re at it!” Although the other thief, whom Dylan also calls a ‘thief’, initially also mocked Jesus, he repented in the end, rebuking the other thief – the joker – saying: “Don’t you fear God even when you have been sentenced to die? We deserve to die for our crimes, but this man (Jesus) hasn’t done anything wrong.”

There is another interpretation and that is the song is back to front. If the third verse was first it might make more sense, i.e. starting the song with ‘All along the watchtower, Princess kept their view, while all the women came and went, Bare-foot servants too’ and then as the two riders were approaching (as mentioned in the third verse) they could then ask, ‘There must be some kind of way out of here.’ The song only has three verses and no chorus. It’s rather unusual structure was once analysed by Christopher Ricks, an English Literature Professor, who commented that, “All Along the Watchtower is a typical example of Dylan’s audacity at manipulating chronological time: at the conclusion of the last verse, it is as if the song bizarrely begins at last, and as if the myth began again.”

The other two members of Jimi’s Experience were, Noel Redding on bass, and Mitch Mitchell on drums, however Redding is not on the recording of All Along the Watchtower. He was also playing in a band called Fat Mattress which Hendrix often, sarcastically, referred to as Thin Pillow and Hendrix was not convinced that Redding was putting all his effort into the Experience and so Hendrix played bass himself.

There has been some confusion as to how Hendrix first got to hear the song. One story is that Michael Goldstein, Bob Dylan’s publicist, once said, “I went to dinner with Albert Grossman – Dylan’s manager – at an awful Mexican restaurant around 46th Street, he gave me this cassette and said, ‘Here’s a sample of Dylan’s latest songs.’ I had a party a week or so later and Jimi was there. I said, ‘how would anybody like to hear something from Dylan that you haven’t heard?’ and I played the tape. Jimi came up to me and said, ‘Hey Mike, can I take that home with me? I really want to listen to that again.’ I said, ‘sure you can have it, what the hell do I care?'” Another story is Dylan’s girlfriend at the time, Kathy Etchingam who was living in London said, “He first heard it like any other Dylan fan would have: he bought a copy of the record. It was soon after he came back from the States and I remember him having the album when he came back along with a bottle of duty-free American whiskey. We played it over and over again. He just loved it.” Hendrix originally wanted to cover I Dreamed I Saw St. Augustine, but, as she recalled, “He had second thoughts. He thought it was too personal. It was Bob Dylan’s dream so he wasn’t going to take that, because he didn’t dream it himself.”

Either way, Hendrix made that song his own, he once said, “All those people who don’t like Bob Dylan’s songs should read his lyrics. They are filled with the joys and sadness of life. I am as Dylan, none of us can sing normally. Sometimes, I play Dylan’s songs and they are so much like me that it seems to me that I wrote them. I have the feeling that Watchtower is a song I could have come up with, but I’m sure I would never have finished it. Thinking about Dylan, I often consider that I’d never be able to write the words he manages to come up with, but I’d like him to help me, because I have loads of songs I can’t finish. I just lay a few words on the paper, and I just can’t go forward. But now things are getting better, I’m a bit more self-confident.”

Around the time of the recording, Hendrix had been working with various members of Traffic, in particular, Dave Mason. In an interview with Song Facts, Mason explained how they met, “I just happened to be sitting in one of those semi-private clubs in London, he was there one night just sitting alone, and it was like, “F**k, I’m just going to go over and say hi and talk to him.” They got talking about John Wesley Harding – which featured All Along the Watchtower and discovered they were both fans and so that’s when Hendrix decided to record the song and invited Mason who plays rhythm on a 12-string acoustic guitar. A few years later Mason recorded his own version which featured on his eponymous debut album in 1974. Mason said of it, “It’s a deceptively simple song: It’s just the same three chords, and they never change.”

Hendrix, like Tony Blackburn and Kenny Everett, to name a couple, were very shy people and didn’t like to be watched when doing what they do in the studio, but strangely ok when doing a live show. Eddie Kramer, one of Hendrix’s regular engineers said, “He’d always face the other way when recording vocals, he hated to be looked at. He was very shy about his vocals.” He never originally wanted to be a singer but it was his father who once confirmed that he first tried after hearing Bob Dylan implying ‘If he can succeed sounding like that, why not me?’ Jimi once commented “I thought, you must admire that guy for having that much nerve to sing so out of key,” but he would defend Dylan’s voice in interviews, attacking those who accused him of sounding like a ‘broken-leg dog.’