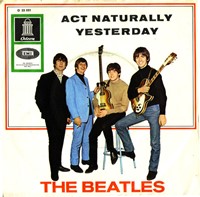 Every one of the 23 legitimate Parlophone-issued Beatles’ songs between 1963 and 1970 were written by John Lennon and Paul McCartney, the only one that wasn’t was Something which was written by George Harrison. Only a couple of later issued old tracks – Baby It’s You and Twist and Shout were covers and hence written by other people. It’s hard to imagine many other well-known Beatles songs that were not written by the band themselves, but there were a few in their very early days and one, which is probably not so well known as a cover was Act Naturally which appeared on their 1965 album Help! Additionally, it was one of a handful of songs of which neither John or Paul sang lead.

This song was the Beatles’ penultimate of their 24 non-original official recordings. The song’s idea came from a Californian songwriter called Johnny Russell who was raised in Fresno and had entered, and won, a number of talent shows and began playing small clubs in his local area. One night he was due to be dating a girl when he got a call from some friends from Oklahoma, “They were doing a recording session in Los Angeles and they wanted me to come down and help them,” he explained to Ace Collins. “There was no getting out of it, so I had to break the date with the girl. She asked me why I was going to L.A. so I answered, ‘They are going to put me in a movie and make a big star out of me.’ We both laughed.”

On his journey there he thought about the glamorous idea of being made into a movie star in Hollywood so he began playing a riff and trying to turn the idea into a country song. “I wrote the song and I even tried to teach it to the boy we were recording with, but he couldn’t seem to learn it,” Russell remembered. “I sent a copy to a producer I had worked with and he turned it down explaining that songs about the movies just weren’t doing the business. He suggested writing a song about heartbreak.” Russell wasn’t convinced as so many songs were about heartbreak and believed his own idea was unique and thought it was a spin on being in love. He had been working with a female songwriter called Voni Morrison, “I played it to her and she fell in love with it”, he said. “She thought the song would be ideal for a country singer she had been working with called Buck Owens.”

Owens did like the song and did record it originally in 1963. Russell was grateful and, “we made an agreement that whatever we wrote, both of our names would go on the song. We made an acetate of five of our songs with both of us credited and she gave them all to Buck to record. After a few weeks, Morrison called Russell to say that Buck liked four of the songs, but not Act Naturally. Owens’ backing group were called the Buckaroos which comprised, Don Rich on guitar, Tom Brumley on pedal steel guitar, bassist Doyle Holly and drummer Willie Cantu. Luckily Don Rich had heard Act Naturally and kept humming and singing it to himself whilst they toured because he loved it. Before long, Owens began humming it and it grew on him. Russell explained how he found out that Owens was finally going to record it, “I was in a hotel club in a city called Eureka in California one night when I got a call from Buck and he asked if he could record the song. I told him it was fine by me. I later found out that he had already recorded it and just wanted the publishing rights which I was more than pleased to do in order to get the song recorded.”

The song is basically saying if it was possible to make a film about a man who is lonely and sad and that he would be ideal for the part if he just acted naturally. As the song is quite up-tempo, it seems that it could be hiding his pain. Could this have been a slight inspiration on Smokey Robinson when he wrote The Tears of a Clown which itself was based on the clown in the opera Pagliacci?

Owens went to number one on the US country chart giving him his first of 21 number ones and eventually became one of his most popular songs. Ringo Starr is a country music fan and took lead vocal to showcase the track. They played it on their third Ed Sullivan Show appearance and it was released as a single in the States as a double A side with Yesterday, but Act Naturally stalled at number 47.

Owens often tells this story, “I was at the Royal Gardens Hotel in London and Mick Jagger walked in and ordered his meal. He noticed that I was wearing a baseball cap with Nashville on and asked me if I was in the music business. I told him I was a songwriter and he asked if I’d written anything he might know. I replied that the Beatles had cut Act Naturally, before I could finish the title, Mick grinned and began singing it, he knew it all.