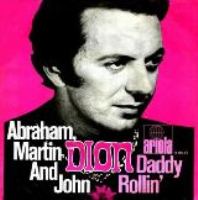 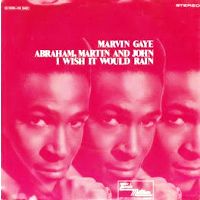 Some singers have such a command of a song that the listener is convinced it’s their own song. One such singer is Marvin Gaye who famously had a number one and is synonymous with I Heard It Through the Grapevine, but he didn’t write it nor record it first. Smokey Robinson recorded it first in 1966 and Gladys Knight recorded it the following year and her version was released first. The Isley Brothers and Willie Bobo both did it in the same year, but Gaye took it to number one on both sides of the Atlantic. But this week I focus on another Marvin Gaye track, also previously recorded by Smokey Robinson, which hit the UK top 10 in 1970 and written about four dead men.

The song is Abraham, Martin and John, I’ll come to the fourth later, which was written by the Indiana-born songwriter called Dick Holler who had been a member of band called the Dixie Cats in the mid-fifties which also included the singer Jimmy Clanton. Holler was a member of a number of different bands until the early sixties when he began to concentrate on songwriting. In 1966 he wrote a song called Snoopy vs the Red Baron which was recorded by a Florida band called The Royal Guardsmen and made number two in the US and number eight in the UK.

The following year he wrote Abraham Martin and John and gave it to the Royal Guardsmen who recorded the demo. The men in question are Abraham Lincoln, Martin Luther King and John F. Kennedy, three iconic figures who campaigned for civil rights in America. The last four lines of the song are, ‘Has anybody here seen my old friend Bobby, can you tell me where he’s gone? I thought I saw him walkin’ up over the hill With Abraham, Martin and John,’ which is a reference to JFK’s brother, Robert Kennedy who was also an American politician and civil rights campaigner specialising in the fight against organised crime and the Mafia. The song was recorded just two months after Robert’s death.

Dick Holler, who had actually written the song on the day Robert Kennedy was assassinated, played the demo to the head of Laurie records who thought it would be ideal for one of his former artists whose hit making days of the late fifties and early sixties had come to an end due to a drug addiction, but was now clean and looking to get his career back on track, that singer was Dion DiMucci. He had approached his former label looking to renew his contract and offered them a song he’d written about his drug problem called Daddy Rollin’ They were happy to but also told him they wanted him to record Abraham, Martin and John, they showed him the sheet music and Dion instantly hated it and refused to record it. In return Laurie refused to renew his contract. He eventually relented and it’s often cited that either his mother-in-law or producer Phil Gernhard first made Dion realise what the song was about, he didn’t get it. Gernhard claims that it was when Dion had to perform the song live with an acoustic guitar on the Smothers Brothers Comedy Hour because there was a musicians strike, that he finally understood its sentiment.

Dion said in his 1988 memoir, The Wanderer, “If it had been up to me, Abraham, Martin and John would have stayed just a young songwriter’s dream. I realised that what these four guys — Lincoln, King, and the Kennedys — had in common was a dream. It was like they had the courage to believe that a state of love really can exist… Abraham, Martin and John was a way of reminding people that they could aspire to great things, even in the midst of tragedy and confusion.” He did the song in one take but was irked that his song was relegated to the b side.

What’s always made me curious is that the song is sung in the order of Abraham, John and Martin. Admittedly if it had been called that it would be more of a mouthful to say, but why didn’t they sing the second and third verses the other way round?

The song was the last real success for both the singer and the writer. Dion never returned to the US top 50 again and Holler, who continued to write songs for the like of James and Bobby Purify, Petula Clark, The Bellamy Brothers and Cher, never had another chart hit. Dion once claimed that he had received over 4,000 letters thanking him for recording it.

Abraham, Martin and John has been covered by many people and in many diverse genres including Ray Charles, Bob Dylan, Kenny Rogers, Bon Jovi, Tori Amos, Mahalia Jackson, Andy Williams, Whitney Houston, Cliff Richard, Paul Weller, Harry Belfonte, Marillion, Seasick Steve and even Dr Spock aka Leonard Nimmoy. The only UK hit version was by Marvin Gaye who never charted in his native country, however four versions did make the US top 40; Dion took it to number four, Smokey Robinson & The Miracles made number 33 in 1969, the black comedienne Moms Mabley made number 35 the same year and was the oldest person to debut on the Billboard chart – she was 75 at the time, and the radio DJ Tom Clay made number eight in 1971 when he combined his version into a six-minute medley with Jackie DeShannon’s What The World Needs Now is Love. His version included snatches of speech from both the Kennedys and Luther King and has children defining ‘bigotry’ and ‘segregation’, which, as Spencer Leigh pointed out, is audio journalism at its best.

One of the song’s poignant line is ‘it seems the good die young’ and that is true of Marvin Gaye who was shot dead by his father the day before his 45th birthday. Dion continues to make music, his last album in 2016 being New York Is My Home of which the title track was a duet with Paul Simon. As for Dick Holler, he’s just celebrated his 83rd birthday and in 2007 was inducted into The Louisiana Music Hall of Fame. He currently has two homes, one in Switzerland and the other in Georgia, but returns to his native Baton Rouge, Louisiana for an annual reunion at the Baton Rouge Eagles’ Club.