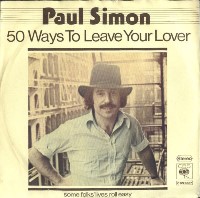 On the face of it, this song would imply that the protagonist is getting advice from a new lover about how to get rid of the old one. Maybe he’s been deceiving her, but the only thing that stands out as being deceiving is the title. You read the title and think that’s a lot of ways but in reality, only list’s five. So, what happened to the other 45? Maybe he didn’t need them!

Simon and his vocal partner, Art Garfunkel, who began their career under the name Tom and Jerry, had major success between 1966 and 1970 and really hit the big time right at the end when Bridge Over Troubled Water – the album and single – topped all charts and sold by the bucket load, but it caused tensions and by 1973 the pair had gone their own ways and launched successful solo careers. Who was the most successful? It’s hard to say because although Paul Simon had more hits he never reached number one in the UK, but he did write all his own songs whereas Art didn’t write any of his hits, but did have two ‘eyes’ chart toppers in the shape of I Only Have Eyes for You in 1975 and Bright Eyes in 1979, the latter becoming the best-selling single of that year.

Paul’s solo career began in 1972 with Mother and Child Reunion which reached number five. He followed it with Me and Julio Down by The Schoolyard, Take Me to The Mardi Gras, Love Me Like A Rock and then after a two-and-a-half-year gap he returned in 1976 with 50 Ways to Leave Your Lover. In essence Paul really did write this after leaving his lover. He had been married to Peggy Harper since 1969 and divorced in 1975. On his 1983 album Hearts and Bones Paul reflected on his married life in the song Train in the Distance. He then began a relationship with the actress Carrie Fisher.

So how did that song come about? Well Simon, in an interview with Rock Lives: Profiles and Interviews, explained how it started, “I woke up one morning in my apartment on Central Park and the opening words just popped into my mind: ‘The problem is all inside your head, she said to me…’ That was the first thing I thought of. So, I just started building on that line. It was the last song I wrote for the album, and I wrote it with a Rhythm Ace, one of those electronic drum machines so maybe that’s how it got that sing-song ‘make a new plan Stan, don’t need to be coy Roy’ quality. It’s basically a nonsense song.” He’s been quite reserved regarding the song’s subject, except to say that it wasn’t about his wife.

The song features three female backing singers who were Patti Austin, Phoebe Snow and Valerie Simpson of Ashford & Simpson. Another one of the song’s highlights is the drum pattern and much sampled intro and that’s the work of Steve Gadd.

Paul Simon biggest success came in 1986 with the release of the multi-million selling album Graceland. As to whether he’ll ever write a sequel to 50 Ways…. and let us know what the other 45 were is debateable now, but a few years ago Danny Baker flagged this up on the afternoon show on BBC London where he asked his loyal listeners to suggest other excuses that Paul Simon could have used and two of the ones that came out were, ‘Tell her you don’t care at all, Paul’ and ‘Just tell her that your gay, Ray’.